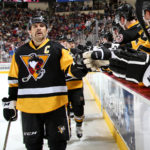 Friday, Oct. 27 – PENGUINS 3 vs. Hershey 2
Wilkes-Barre/Scranton saw its I-81 rival erase a 2-0 deficit, but Dominik Simon’s third period power play goal gave the Penguins their fourth-straight win. Tristan Jarry turned aside 30 shots and stood tall amidst a late-game barrage from the Bears. Wilkes-Barre/Scranton also scored its first extra attacker goal of the season when Jean-Sébastien Dea found the back of the net during a delayed penalty in the first period.

Saturday, Oct. 28 – PENGUINS 5 at Bridgeport 2
The Penguins saw multi-point nights from a handful of players, but perhaps no performance was more key than that of Ryan Haggerty, who notched two tallies in his first game of 2017-18. Adam Johnson also scored his first goal as a pro while Jarry earned the “W” in back-to-back starts for the team’s fifth in a row.

Friday, Nov. 3 – PENGUINS at Lehigh Valley
Wilkes-Barre/Scranton fell in its last visit to PPL Center, but still owns a daunting 13-4-1-1 all-time record in Allentown. The Phantoms recently saw a six-game winning streak come to an end, but their high-flying forward Danick Martel leads the league with 10 goals. Through two contests this season, the Penguins and Phantoms are deadlocked at 1-1-0-0 records.

Sunday, Nov. 5 – PENGUINS vs. Hershey
The Penguins return to home ice for a Sunday matinée with the Bears. Wilkes-Barre/Scranton is 13-6-0-0 in its last 19 games against Hershey, but 11 of those games were decided by a one-goal margin. This match-up will take place during the Penguins’ first-ever Harry Potter Day and is also a Kids Get In Free Sunday. Children aged 14 and under receive free admission to the game with the paid purchase of an adult ticket.

– Including the 2016 Calder Cup Playoffs, seven of Sprong’s 12 AHL goals have come on the power play.

– Dominik Simon is currently on a four-game point streak (1G-4A).

– Saturday was Jean-Sébastien Dea’s 200th AHL game and thus his 200th game with Wilkes-Barre/Scranton. He is the 29th player in team history to skate in 200 games with the Penguins.

– Saturday was Ryan Haggerty’s third multi-goal game with the Penguins and the fifth of his pro career.