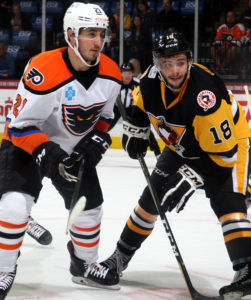 ALLENTOWN, Pa. – The Wilkes-Barre/Scranton Penguins and Lehigh Valley Phantoms put forth an electrifying contest at PPL Center on Friday night with the Penguins emerging on top, 6-5, in the shootout.

Wilkes-Barre/Scranton (7-2-0-0) traded back-and-forth offense with the Phantoms all night, including a wild second period in which the two clubs combined for seven goals in those 20 minutes.

The Phantoms got on the board first when Tyrell Goulbourne tapped one in on the backdoor at 13:52 of the opening frame.

The zaniness in the second stanza started 1:43 into the period, when Gage Quinney gutted out a 1-1 tying goal amidst a net-front scramble. Wilkes-Barre/Scranton went up 3-1 with power play and shorthanded goals separated by only 2:16 of game time. Christian Thomas gave the Penguins their first lead of the game with the man advantage marker, while Jean-Sébastien Dea was responsible for the shorthanded tally.

On the same power play that Dea notched his first career shorty, Danick Martel pulled the Phantoms back within one. T.J. Brennan tied the game, 3-3, five minutes later. A mere 86 seconds after that, Mikhail Vorobyev put Lehigh Valley back on top, 4-3.

The Phantoms were seemingly poised to take their 4-3 lead into the second intermission until Dea forced a turnover and Ryan Haggerty deposited a bar-down snipe, tying the game again with only 10.4 seconds left in the middle frame.

Haggerty scored once more, giving the Penguins a brief 5-4 advantage before Chris Conner potted another equalizer at 11:26 of the third period.

After a heart-stopping overtime, the game went to the shootout. Thomas scored the only goal of the best-of-three series, granting Wilkes-Barre/Scranton the 6-5 victory and its sixth win in a row.

Casey DeSmith improved to 4-0-0 on the season by making 35 saves and denying all three Phantoms attempts in the shootout. Dustin Tokarski turned aside 28 shots for Lehigh Valley.

Wilkes-Barre/Scranton’s next game is Sunday, Nov. 5, when it takes on its other in-state rival, the Hershey Bears. Puck drop for Penguins and Bears is scheduled for 3:05 p.m. at Mohegan Sun Arena at Casey Plaza. Individual tickets for all Penguins home games are available at the Mohegan Sun Arena at Casey Plaza box office, online at TicketMaster.com, or by calling 800-745-3000.