PENGUINS EDGED BY BEARS IN SHOOTOUT, 3-2 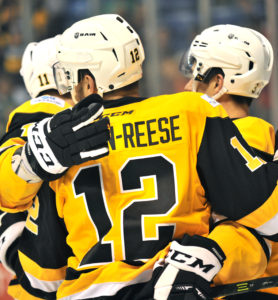 WILKES-BARRE, Pa. – In this season’s second chapter of the I-81 Rivalry, the Wilkes-Barre/Scranton Penguins fell to the Hershey Bears in a shootout, 3-2, on Sunday afternoon at Mohegan Sun Arena at Casey Plaza.

Wilkes-Barre/Scranton (7-2-0-1) saw its six-game winning streak come to an end, but the team was still able to secure a point in the standings and remain tied for first place in the Atlantic Division.

The Penguins got the scoring started just 1:18 into the game when Daniel Sprong tallied his team-leading eighth goal of the season with a backdoor deflection on a shot-pass by Kevin Czuczman.

Hershey evened things up as Wayne Simpson fired a wrist shot into the top right corner of the net past Casey DeSmith with 2:09 left in the opening frame.

The Bears used a power play goal to take a 2-1 lead at 9:26 in the middle frame. Travis Boyd fought off the outstretched stick of a Penguins penalty killer and released a wrist shot into the back of the net.

Three periods wasn’t enough in this rivalry game, and the teams headed to 3-on-3 overtime.

DeSmith stood tall in the overtime, stopping all five shots he faced in the extra frame and went post-to-post to absolutely rob Hershey’s Chris Bourque of a game-winning goal.

Simpson notched the lone goal of the shootout, giving the Bears the win.

DeSmith turned aside 29 of the 31 shots and allowed one shootout goal on two attempts. Copley stopped 25 shots in regulation and overtime and denied all three Penguins’ bids during the shootout.