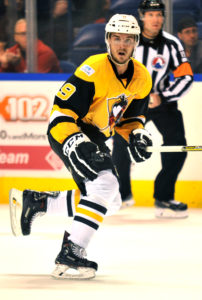 Friday, Nov. 3 – PENGUINS at Lehigh Valley
Wilkes-Barre/Scranton and Lehigh Valley put on an electrifying show at PPL Center, combining for 10 goals in regulation. At the end of a three-round shootout, the Penguins emerged victorious, 6-5. Ryan Haggerty scored twice for the second consecutive game, while Christian Thomas potted a power play goal and the shootout-deciding tally.

Wednesday, Nov. 8 – PENGUINS vs. Toronto
For the third year in a row, Wilkes-Barre/Scranton and Toronto’s first meeting of the season will serve as a clash between the two top teams in the Eastern Conference. The Marlies have allowed the fewest goals per game this season (2.08) and have triumphed in their last three visits to Mohegan Sun Arena at Casey Plaza.

Saturday, Nov. 11 – PENGUINS vs. Providence
The Penguins face-off against the Bruins for the first time since the 2017 Calder Cup Playoffs. After starting the season 6-1-0-0, Providence has dropped three of its last four decisions, including two shutout losses.

Sunday, Nov. 12 – PENGUINS at Hershey
Wilkes-Barre/Scranton makes its first visit of the season to Giant Center for Chocolatetown’s Sunday 5:00 p.m. start time treat. The teams are even with one win apiece in 2017-18, but the Penguins went 4-2-0-0 at Hershey last year.

– Including the 2016 Calder Cup Playoffs, seven of Sprong’s 13 AHL goals have come on the power play.

– Christian Thomas is on a four-game point streak with the Penguins (2G-3A). Thomas departed for Switzerland on Sunday to join Team Canada for the 2017 Karjala Tournament and Olympic evaluation process.