WILKES-BARRE, Pa. – In match-up between the top two teams in the Eastern Conference, the Wilkes-Barre/Scranton Penguins came from behind and defeated the Toronto Marlies, 4-2, on Wednesday night at Mohegan Sun Arena at Casey Plaza.

Wilkes-Barre/Scranton (8-2-0-1) now owns sole possession of first place in the Eastern Conference and has points in eight-consecutive games.

The Marlies notched the first goal of the night a mere 68 seconds into regulation when Dmytro Timashov redirected a shot from Martin Marinčin at the point.

The Penguins evened things up at the 10:58 mark in the first period when Andrey Pedan capitalized on a Marlies turnover in their defensive zone and blasted a slapshot past Toronto goalie Garret Sparks. 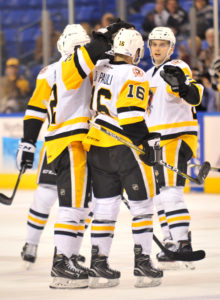 Late in the opening frame, Wilkes-Barre/Scranton authoritatively killed off a five-on-three man advantage that lasted 1:44 to keep the score tied going into the first intermission.

Despite peppering Sparks with a season-high 17 shots in the second period, it took until 18:48 of the stanza for the Penguins to find the back of the net, but that’s exactly what Ryan Haggerty did with his fifth goal in four games. Wilkes-Barre/Scranton wasted little time applying pressure on the Marlies’ defense to begin the third period, and Thomas Di Pauli tallied 1:49 into the frame, making it a 3-1 score in favor of the Penguins.

Nikita Soshnikov caught the Penguins in the middle of a line change, stepped to the slot, shot, and corralled his own rebound to cut the deficit in half and pull Toronto within one goal at 13:48 of the third. The Marlies never got any closer than that, though, as Di Pauli netted his second goal of the night with and empty netter.

Sparks set a new season high with 38 saves in a losing effort, while Casey DeSmith stopped 22 out of the 24 shots he faced to improve to 5-0-1 on the season and remain undefeated in regulation.

Wilkes-Barre/Scranton’s next game is Saturday, Nov. 11, when it takes on the Providence Bruins at Mohegan Sun Arena at Casey Plaza. Puck drop between the Penguins and P-Bruins is scheduled for 7:05 p.m. Individual tickets for all Penguins home games are available at the Mohegan Sun Arena at Casey Plaza box office, online at TicketMaster.com, or by calling 800-745-3000.