Penguins sweep through week and extend points streak to 10 games 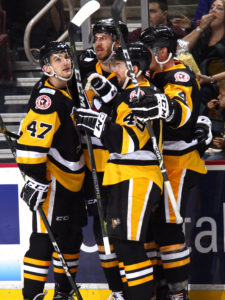 Wednesday, Nov. 8 – PENGUINS 4 vs. Toronto 2
In a mid-week clash of Eastern Conference’s top two teams and division leaders, the Penguins’ offense mustered four goals against the Marlies’ league-leading defense. Andrey Pedan netted his first goal of the season while Thomas Di Pauli scored twice for the first time in his career in the final period to secure the victory. Wilkes-Barre/Scranton recorded a season-best 17 shots in the second period against Toronto.

Saturday, Nov. 11 – PENGUINS 4 vs. Providence 3 (OT)
Wilkes-Barre/Scranton fell behind 2-0 to the team that bounced them from last year’s Calder Cup Playoffs, but the Penguins rallied for three-straight goals to take the lead.  Jarred Tinordi and Kevin Czuczman both netted their first goal of the season as part of the comeback. Providence tied the game late to force overtime, but Ryan Haggerty scored the game-winning goal a mere 20 seconds into the extra period.

Sunday, Nov. 12 – PENGUINS 5 at Hershey 1
Playing on less than 24 hours rest, the Penguins unleashed an offensive onslaught on their I-81 rival despite only recording 13 shots on goal. Five different Penguins scored and 10 different players recorded a point, including Di Pauli who scored for the third-straight game.

Friday, Nov. 17 – PENGUINS at Binghamton
This will be the first time the Wilkes-Barre/Scranton Penguins face the Binghamton Devils and first of six season meetings between the two clubs. The Penguins are 7-3-0-0 in their last 10 visits to Floyd L. Maines Veterans Memorial Arena. The Devils have dropped five out of their seven home games so far this season. The Penguins have won their last three road games and are riding their longest point streak since their 11-game win streak spanning Oct. 17 – Nov. 15, 2015.

– Daniel Sprong is tied for the AHL lead in power play goals (5) and also tops all league rookies in goals (9) and shots (49).

– Including the 2016 Calder Cup Playoffs, seven of Sprong’s 14 AHL goals have come on the power play.

– All five of Zach Aston-Reese’s points this season have come in his last six games.

– A rookie has scored in all but one of the Penguins’ 13 games this season, the lone exception coming on Oct. 27 vs. Hershey.