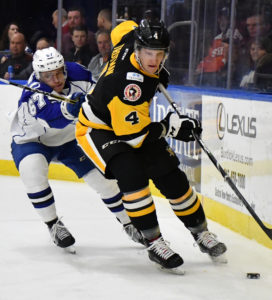 Colin Smith put forth a goal and an assist for the Penguins, but it wasn’t enough as Wilkes-Barre/Scranton (12-3-0-1) saw its league-best point streak come to an end at 12 games.

Alexander Volkov scored less than two minutes into the game, granting the Crunch an early lead.

Three seconds ticked off the clock on the Crunch’s first power play of the game when Jamie McBain blasted a slap shot into the back of the Penguins’ net. Fifty-seven seconds later, another McBain shot led to a Syracuse goal with Kevin Lynch getting the redirect in front.

With two man advantage opportunities late in the opening frame, Wilkes-Barre/Scranton hit the post three different times, but couldn’t get any pucks to cross the goal line. Therefore, Syracuse took a 3-0 lead into the first intermission.

Smith got the Penguins on the board with a power play goal midway through the second period. Wilkes-Barre/Scranton pulled within one when Smith set up Dominik Simon on a two-on-two rush at the 13-minute mark of the third frame.

Trailing by a goal late in the third period, Syracuse’s Ben Thomas was booked for a boarding penalty that earned him a game misconduct and afforded the Penguins a five minute major power play. Wilkes-Barre/Scranton was unable to convert on the lengthy man advantage and saw Syracuse pot two empty netters in the final two minutes of play. Carter Verhaeghe and Michaël Bournival’s empty net goals brought the game to its final score of 5-2.

Casey DeSmith made 25 saves manning the pipes for the Penguins and was handed his first loss in regulation this season (9-1-1). Louis Domingue posted 23 stops for the win.

The Penguins’ next game is tomorrow, Saturday, Nov. 25, the second half of a home-and-home set with Syracuse. Puck drop between the Penguins and Crunch is 7:05 p.m. at Mohegan Sun Arena at Casey Plaza. Individual tickets for all Penguins home games are available at the Mohegan Sun Arena at Casey Plaza box office, online at TicketMaster.com, or by calling 800-745-3000.