FAN FRIDAYS ARE BACK!

Come on out this Friday, December 1 to root on the Wilkes-Barre/Scranton Penguins as they take on the Milwaukee Admirals at 7:05pm.  It’s the first of our Eyewitness News Fan Fridays, with lower level tickets available for just $14 (while supplies last).  Plus we’ll be serving up select draft beers for just $2 from 6-7:30pm.

Grab you official Penguins team photo courtesy of Bayard Printing, the Times Tribune and Citizens Voice Team, and stick around for our postgame autograph session with a pair of Pens players.

Fan Friday tickets are available at the Mohegan Sun Arena box office, or by calling the Penguins at 570-208-7367. 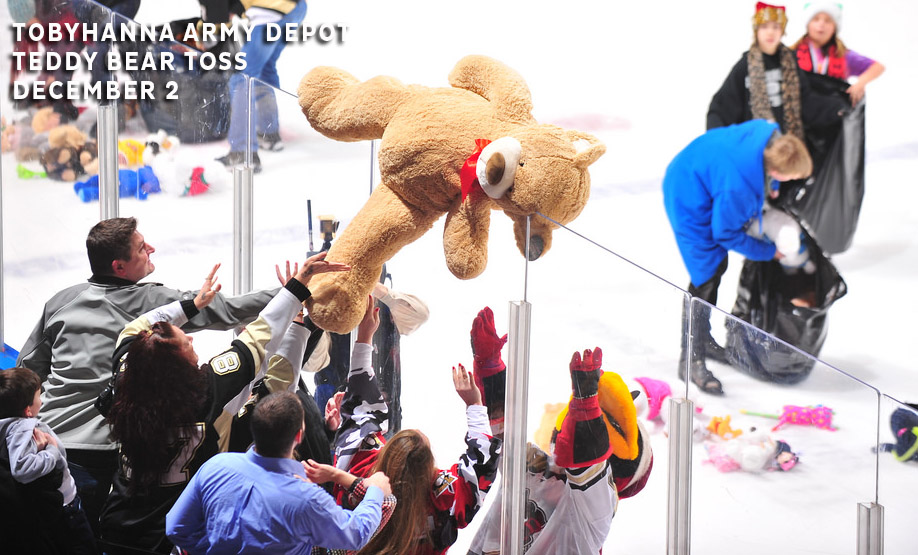 It’s the one time we LIKE to see bears inside the arena!

Join the Penguins on Saturday, December 2 when we take on the Rochester Americans at 7:05pm for our annual Tobyhanna Army Depot Teddy Bear Toss.

Fans are encouraged to bring new, unwrapped stuffed toys to the game, which will be tossed onto the ice following the Penguins’ first goal of the game.  The plush toys will be collected and distributed to children in need through Tobyhanna Army Depot’s “Operation Santa Claus” program.

The first 4,000 fans in attendance will also receive the second of our four Penguins Card Strips, featuring five Pens players and a voucher good for a free personal pizza (with purchase) from Grotto Pizza in Wilkes-Barre.

Tickets for the game are available at the Mohegan Sun Arena box office, online at TicketMaster.com or by calling 570-208-7367.

The Wilkes-Barre/Scranton Penguins will once again be doing their part to bring a little warmth to those in need this winter.

The Penguins and Eye Care Specialists will be hosting their annual winter coat drive, benefitting Luzerne County Head Start, at the team’s December 8 game against the Charlotte Checkers.  New and gently used coats will be collected at the East Gate Entrance of the Mohegan Sun Arena at Casey Plaza.

The Penguins will also be accepting donations at their front office location inside the Toyota SportsPlex at 40 Coal Street in Wilkes-Barre in advance of the game.

Tickets for December 8 are available at the Mohegan Sun Arena box office, online at TicketMaster.com or by calling 570-208-7367