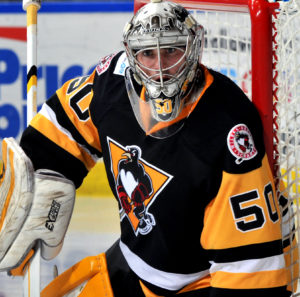 Maguire has an 8-3-0 record with the Nailers this season and has earned a .910 save percentage and 3.28 goals against average in that time. Last season, the Powell River, British Columbia native appeared in 35 games for Wheeling, posting a 14-16-4 record with two shutouts, a .897 save percentage and 3.20 goals against average. Maguire was named ECHL CCM Goaltender of the Month for January after putting forth a 6-1-1 record and both of his season’s shutouts in 9 games.

Maguire also played in one game for Wilkes-Barre/Scranton last year, earning the win for the Penguins in their Macgregor Kilpatrick Trophy-clinching victory over the Bridgeport Sound Tigers on Apr. 15, 2017.

The 24-year-old netminder was selected in the fourth round (113th overall) by Pittsburgh at the 2012 NHL     Entry Draft.

Stevens has played three games this year with Wheeling, posting a 2-0-1 record. Stevens owns a .907 save percentage and a 3.27 goals against average in his time with the Nailers, as well. The 24-year-old from Niskayuna, New York did not appear in any games with the Penguins during the course of his PTO.

Wilkes-Barre/Scranton’s next game is Friday, Dec. 1, when the Penguins welcome the Milwaukee Admirals to Mohegan Sun Arena at Casey Plaza. Puck drop between the Penguins and Admirals is 7:05 p.m., and marks the return of WBRE/WYOU Eyewitness News Fan Fridays.  All tickets for Friday’s game against Milwaukee are $14 and select draught beers are $2 from 6:00-7:30 p.m. Individual tickets for all Penguins home games are available at the Mohegan Sun Arena at Casey Plaza at Casey Plaza box office, online at TicketMaster.com, or by calling 800-745-3000.