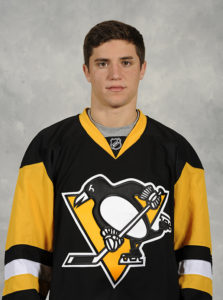 Tiffels, 22, has posted three goals and seven assists for 10 points over the course of the first nine ECHL games of his career. He rattled off seven of his points with Wheeling this season over the course of a four-game point streak that spanned from Nov. 11 to Nov. 17, 2017.

Tiffels, who hails from Cologne, Germany, has appeared in five games for the Penguins this season. He scored his first AHL goal on Nov. 25, 2017 against the Syracuse Crunch. Prior to turning pro, he skated for three seasons at Western Michigan University, posting 27 goals and 32 assists for 59 points in 105 games. Tiffels was drafted by Pittsburgh in the sixth round (167th overall) of the 2015 NHL Entry Draft.

The Penguins’ next game is tomorrow, Wednesday, Dec. 6, when they travel to PPL Center to take on the Lehigh Valley Phantoms. Wilkes-Barre/Scranton’s next home game is Friday, Dec. 8 against the Charlotte Checkers. The Checkers’ visit to Mohegan Sun Arena at Casey Plaza is also a WBRE/WYOU Eyewitness News Fan Friday. All tickets for non-glass seating for Dec. 8’s contest are $14, and select draught beers are $2 from 6:00-7:30 p.m. Puck drop between the Penguins and Checkers is 7:05 p.m. Individual tickets for all Penguins home games are available at the Mohegan Sun Arena at Casey Plaza at Casey Plaza box office, online at TicketMaster.com, or by calling 800-745-3000.