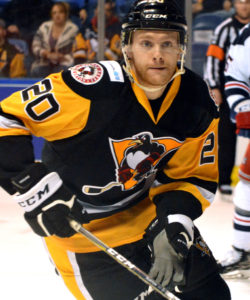 WILKES-BARRE, Pa. – The Wilkes-Barre/Scranton Penguins announced today that they have reassigned forward Jarrett Burton to the team’s ECHL affiliate, the Wheeling Nailers.

Burton has played in nine games this season for Wilkes-Barre/Scranton, recording one goal and one assist in that time. This will be the 26-year-old from Echo Bay, Ontario’s first assignment with Wheeling since a brief nine-game stint with the Nailers from Jan. 20 to Feb. 4, 2017. He has 77 points (31G-46A) in 113 career ECHL games, all spent with Wheeling.

Burton appeared in 39 games with Wilkes-Barre/Scranton last year during his first season playing under an AHL contract. He posted seven goals and four assists for 11 points in his rookie season.

Proving to be an effective penalty killer during his time in the pros, Burton previously played four years at Clarkson University, where he tallied 28 goals, 26 assists, 54 points and 91 penalty minutes in 141 collegiate games.

The Penguins’ next game is tonight, Friday, Dec. 8, against the Charlotte Checkers. Puck drop between the Penguins and Checkers is 7:05 p.m. and is a WBRE/WYOU Eyewitness News Fan Friday. All tickets for Friday’s contest are $14, and select draught beers are $2 from 6:00-7:30 p.m. Individual tickets for all Penguins home games are available at the Mohegan Sun Arena at Casey Plaza box office, online at TicketMaster.com, or by calling 800-745-3000.