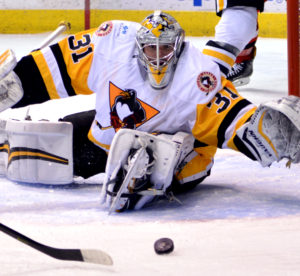 WILKES-BARRE, Pa. – The Wilkes-Barre/Scranton Penguins fought hard to the very end, but came up one goal short in a 2-1 loss to the Charlotte Checkers on Friday night at Mohegan Sun Arena at Casey Plaza.

Wilkes-Barre/Scranton (13-7-1-1) saw Daniel Sprong score on the power play to assume the team lead in goals (11) and points (17) and pull his team within striking distance, but the equalizer never materialized.

The two clubs played to a scoreless first period with Penguins goalie Sean Maguire shining in net, making 14 saves in the opening frame. Maguire was eventually solved by Andrew Miller at 6:20 of the second period.

Charlotte later capitalized on a man advantage at 8:30 of the middle frame as Andrew Poturalski unloaded a wicked wrister just inside the far post behind Maguire, giving the visitors a 2-0 lead.

The final stanza started with a bang for the Penguins when Jean-Sébastien Dea won a face-off right to Sprong, who put forth one of his patented one-timers, blasted it off the post and into the Checkers’ net. Sprong’s sixth power play goal of the season came just 37 seconds into the third period.

The Penguins had eight more shots on goal and several more man advantage opportunities in the third period, but couldn’t beat Jeremy Smith for a tying goal before the expiration of 60 minutes.

Maguire impressed in his first start of the season, denying 28 of the 30 shots he faced. Smith made 22 saves while manning the pipes for Charlotte.

The Penguins’ next game is Sunday, Dec. 10, when they travel to visit their I-81 rival, the Hershey Bears. Wilkes-Barre/Scranton’s next home game is Wednesday, Dec. 13 against the Springfield Thunderbirds. Puck drop between the Penguins and T-Birds is 7:05 p.m. Individual tickets for all Penguins home games are available at the Mohegan Sun Arena at Casey Plaza box office, online at TicketMaster.com, or by calling 800-745-3000.