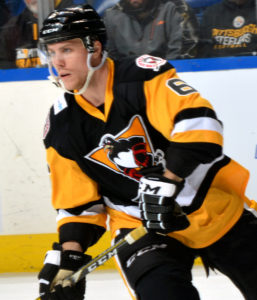 Prow has played in six games for Wilkes-Barre/Scranton this season, picking up an assist on Nov. 11, 2017 against the Hershey Bears. The former Hobey Baker Award Finalist skated in 59 games for the Penguins last season and registered 16 points (1G-15A).

The 25-year-old blueliner has appeared in four career ECHL games, all with Wheeling, during which Prow posted two assists.

Prow joined the Penguins for this evening’s game, Sunday, Dec. 10, when they travel to Giant Center to take on the Hershey Bears. Wilkes-Barre/Scranton’s next home game is Wednesday, Dec. 13 against the Springfield Thunderbirds. Puck drop between the Penguins and T-Birds is scheduled for 7:05 p.m. Individual tickets for all Penguins home games are available at the Mohegan Sun Arena at Casey Plaza at Casey Plaza box office, online at TicketMaster.com, or by calling 800-745-3000.

GUERIN JOINS LIST FOR GOAL IN ONE GOLF CLASSIC