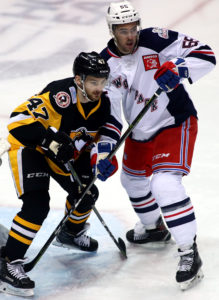 HARTFORD, Conn. – The Wilkes-Barre/Scranton Penguins suffered a 7-3 defeat at the hands of the Hartford Wolf Pack on Friday night at XL Center.

Wilkes-Barre/Scranton (15-8-1-1) surrendered a bevy of goals in a short period of time early in the second period that put it in a hole that it was never able to escape. John Gilmour, Scott Kosmachuk and Peter Holland all recorded three-point games for Hartford.

The Wolf Pack opened the scoring at 6:52 of the first period. Defenseman Ryan Graves joined an odd-man rush headed towards the Penguins’ net and was fed a trailing feed from Cole Schneider before ripping it past Casey DeSmith.

Thomas Di Pauli raced up ice while the two teams were skating at four-on-four and slid a backhand shot under Marek Mazanec to tie the game, 1-1, with 6:31 left in the opening frame. However, Hartford’s Kosmachuk converted on the power play two minutes after the Di Pauli tally, putting the Wolf Pack back in the lead.

Wilkes-Barre/Scranton started to chip away at the mighty deficit midway through the middle frame when Teddy Blueger corralled a favorable bounce off the end boards, banked it off Mazanec’s back and across the goal line.

The Penguins has several strong scoring chances early in the third, but either hit the post or were denied by Mazanec. The Wolf Pack notched goals six and seven courtesy of Fontaine and Anthony DeAngelo at 7:21 and 8:09 of the third period, respectively.

Daniel Sprong posted his team-leading 15th goal of the season at 9:20 of the final frame of regulation, brining the game to its final score of 7-3.

DeSmith made seven saves on 11 shots before being replaced by Maguire, who denied the Wolf Pack 24 times on 27 shots faced. Mazanec made 31 saves in the win.

The Penguins’ next game is tomorrow, Saturday, Dec. 16, as they stay in the confines of Connecticut to take on the Bridgeport Sound Tigers. Wilkes-Barre/Scranton’s next home game is Friday, Dec. 22 against the Binghamton Devils. Puck drop between the Penguins and Devils is scheduled for 7:05 p.m. at Mohegan Sun Arena at Casey Plaza. Individual tickets for all Penguins home games are available at the Mohegan Sun Arena at Casey Plaza box office, online at TicketMaster.com, or by calling 800-745-3000.