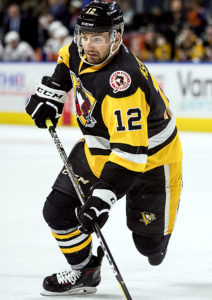 BRIDGEPORT, Conn. – The Wilkes-Barre/Scranton Penguins and Bridgeport Sound Tigers enjoyed a back-and-forth contest full of scoring chances and great goaltending on both sides at Webster Bank Arena on Saturday night. The game was so evenly matched, that it required overtime, with Bridgeport emerging as the victor, 3-2.

Wilkes-Barre/Scranton (15-8-2-1) earned a crucial point in the standings by forcing overtime with a late goal from rookie forward Zach Aston-Reese, but couldn’t stave off the Sound Tigers during a man advantage in OT.

Greg McKegg got the Penguins on the board first, scoring on a wrap-around try 6:56 into the game.

Early in the second period, Bridgeport goalie Kristers Gudļevskis removed himself from the game with what was later announced as a lower body injury, and Christopher Gibson had to take his place in the Sound Tigers’ crease. Gibson performed well in his sudden relief appearance, denying the Penguins on all nine shots they threw his way in the second period.

While Gibson held Wilkes-Barre/Scranton at bay for the majority of the middle frame, Devon Toews brought Bridgeport even with its opponent by scoring 1:14 prior to the second intermission.

The third period was spent with the two clubs trading power play opportunities, and Scott Eansor gave Bridgeport a 2-1 lead with a man advantage marker at 13:46 of the final frame. Zach Aston-Reese answered for the Penguins 1:54 later, sending the game to overtime.

Sebastian Aho earned Bridgeport the extra point by scoring on the backdoor during a carryover power play that spanned the third period and into overtime. Aho’s goal, the defenseman’s fourth game-winner this season, game the Sound Tigers the 3-2 win just 26 second into the extra period.

Casey DeSmith made 30 saves in the loss. Gudļevskis recorded seven saves before being replaced by Gibson, who turned aside 14 of 15 shots faced to earn the win.