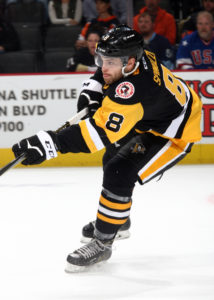 WILKES-BARRE, Pa. – The Wilkes-Barre/Scranton Penguins announced today that they have signed defenseman Kevin Spinozzi to an American Hockey League contract for the remainder of the 2017-18 season.

Spinozzi has been with the Penguins on a professional tryout agreement since September when he made the team out of training camp. The first-year pro has appeared in six games for Wilkes-Barre/Scranton this season and earned his first AHL point with an assist yesterday, Friday, Dec. 15, 2017 at Hartford.