PENGUINS GET TIFFELS AND WYDO FROM WHEELING 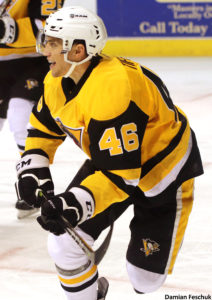 Tiffels, 22, has posted four goals and eight assists for 12 points over the course of the first 15 ECHL games of his career. The Cologne, Germany native and first-year pro has appeared in five games for the Penguins this season and scored his first AHL goal on Nov. 25, 2017 against the Syracuse Crunch.

Wydo, 26, is playing in his third season of professional hockey and currently leads the Nailers in points with 30 (13G-17A). His 13 goals are also tied for first on the team, and his 17 assists rank tied for second. This comes one year after leading Wheeling in goal scoring at the end of the 2016-17 season (30) and finishing tied for the team’s highest point total (60). Over the course of his 164-game ECHL career, the forward from Allen Park, Michigan has posted 67 goals and 79 assists for 146 total points.

Wydo appeared in three games for Wilkes-Barre/Scranton last season and scored his first and only AHL goal on Apr. 9, 2017 at Providence.