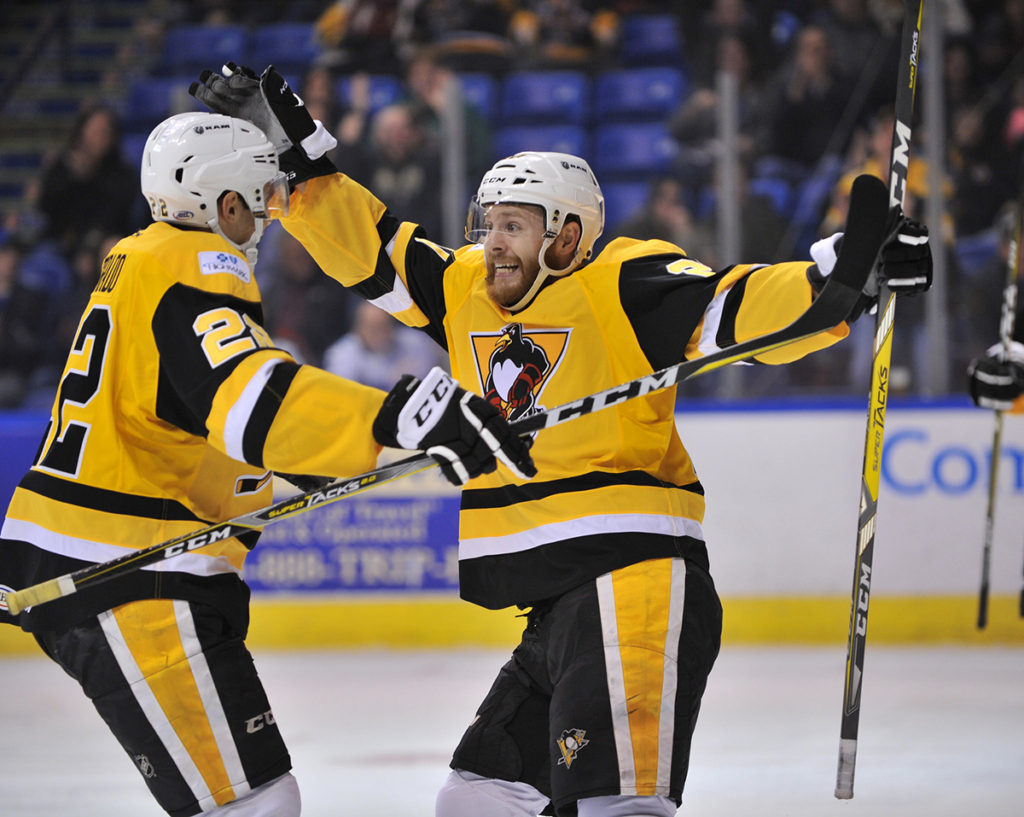 The Penguins started off the scoring when Adam Johnson raced up the ice to beat out an icing call, and then set up Blueger in the low slot with a beautiful pass at 4:19 of the first period. Wilkes-Barre/Scranton added to its lead four minutes later with Burton redirecting a point shot from Kevin Czuczman past Binghamton goalie Ken Appleby.

The Devils got on the board on the power play as John Quenneville ripped one from the top of the circle and beat Leighton glove side at 12:37 of the opening frame. Nick Lappin evened the score at 15:31 of the first period.

Binghamton delivered a shorthanded goal from Michael Latta on a two-on-one rush with Tim Kennedy that granted the Devils a 3-2 lead with only 54 seconds before the first intermission.

After a scoreless, special-teams filled second stanza, the Penguins finally found an equalizer with one of the strangest goals of the season. Cody Wydo and Burton engaged in a battle for the puck with a Devils defender in the corner of the Binghamton zone, and when the puck hopped free, Burton swatted it up into the air. After roughly three seconds of hang time, the puck dropped off of Appleby’s back and across the goal line for Burton’s first multi-goal game of his AHL career. The tying goal came at 7:15 of the third period, and ultimately forced the contest to overtime.

With under a minute left to play in the extra period, Blueger tapped in his second tally of the night thanks to a tape-to-tape pass from Jean-Sébastien Dea, giving Wilkes-Barre/Scranton the 4-3 victory.

Leighton recorded 28 saves in his first career start with the Penguins, while Appleby turned aside 31 of 35 shots faced for the Devils.

The Penguins’ next game is tomorrow, Saturday, Dec. 23 against the Lehigh Valley Phantoms at Mohegan Sun Arena at Casey Plaza. Saturday’s game also serves as the Penguins’ Festivus Celebration, including a Festivus pole on the concourse and specialty Festivus jerseys to be auctioned off during the game. Puck drop between the Penguins and Phantoms on Festivus Night also has a special 5:05 p.m. start time. Individual tickets for all Penguins home games are available at the Mohegan Sun Arena at Casey Plaza box office, online at TicketMaster.com, or by calling 800-745-3000.