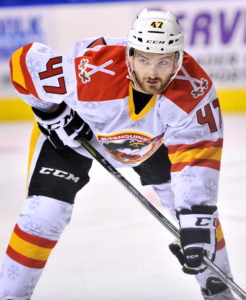 WILKES-BARRE, Pa. – The Wilkes-Barre/Scranton Penguins and Lehigh Valley Phantoms engaged in a tightly contested affair on Saturday in both teams’ final game before the holiday break, with the Phantoms narrowly pulling off a 3-2 victory at Mohegan Sun Arena at Casey Plaza.

Teddy Blueger scored for the third time this weekend, but his continued hot streak couldn’t put Wilkes-Barre/Scranton (16-9-2-1) over the top in this down-to-the-wire contest with its Pennsylvania Turnpike rival.

The Penguins opened the scoring late in the first period when a rip at the top left circle from Zach Aston-Reese was deflected by Blueger and over the shoulder of Phantoms netminder Dustin Tokarski at 18:16.

Chris Conner eventually pulled Lehigh Valley even with Wilkes-Barre/Scranton with his own shot from the top of the left circle at 16:35 of the second period. The Penguins showed no quit as they pushed the puck right back down to the Phantoms end, and Ryan Haggerty stuffed a loose puck through Tokarski two minutes after Conner tied the game.

Midway through the third period, Lehigh Valley’s Nicolas Aubé-Kubel snuck one underneath Casey DeSmith on a one-timer, knotting things up, 2-2.

The Phantoms took their first lead of the game with 6:07 remaining in regulation after a stifled breakout by the Penguins resulted in Conner setting up Oskar Lindblom with a slick drop pass in the slot. Lindblom’s goal resulted in his third point of the night (1G-2A) and put Lehigh Valley ahead, 3-2.

Wilkes-Barre/Scranton pulled DeSmith in favor of an extra attacker with 1:43 still left in the game, but the equalizer never materialized, and the Penguins were unable to force overtime for the third-straight game.

DeSmith stopped 29 of 32 shots in the effort, while Tokarski denied 39 of 41 Penguins bids.

The Penguins’ next game is Wednesday, Dec. 27, and once again their opponent will be the Phantoms. Puck drop between the Penguins and Phantoms is scheduled for 7:05 p.m. at Mohegan Sun Arena at Casey Plaza. Individual tickets for all Penguins home games are available at the Mohegan Sun Arena at Casey Plaza box office, online at TicketMaster.com, or by calling 800-745-3000.