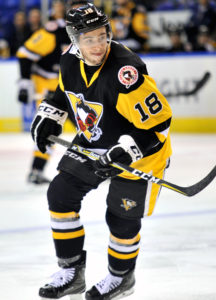 WILKES-BARRE, Pa. – The Wilkes-Barre/Scranton Penguins and Lehigh Valley Phantoms engaged in yet another tightly contested affair on Wednesday night with the Phantoms narrowly pulling off a 5-4 victory at Mohegan Sun Arena at Casey Plaza.

Every member of Wilkes-Barre/Scranton’s (16-10-2-1) line of Garrett Wilson (1G-1A), Gage Quinney (1G-1A) and Daniel Sprong (0G-2A) put forth a strong offensive showing. Despite their six combined points, Lehigh Valley edged their Pennsylvania Turnpike rival and pulled farther ahead in the division standings.

The Phantoms began the scoring 2:57 into the period after Nicolas Aubé-Kubel collided with Jean-Sébastien Dea, who then in turn ran into Penguins goaltender Casey DeSmith. With Wilkes-Barre/Scranton’s net vacant, T.J. Brennan’s shot from the point went into the open cage and gave Lehigh Valley a 1-0 lead.

Mike Vecchione had a cross-crease pass ricochet off of Penguins defenseman Frank Corrado and past DeSmith during a power play at 14:35 of the first period, making it 2-0.

The Penguins entered the second period on the power play and used that opportunity to create their first goal of the game. Just as man advantage expired, Colin Smith received a between-the-legs drop pass Wilson to get a wide-open view of the net and fired it in just 56 seconds into the middle frame.

Chaos ensued midway through the second period, when a four-goal scoring spree broke out in a three-minute stretch starting with Wilkes-Barre/Scranton tying the game, 2-2, on a broken play that resulted in Quinney tucking a puck around the post and off of Lehigh Valley netminder Dustin Tokarski at 10:54 of the second period. Tyrell Goulbourne answered back for the Phantoms at 12:03 of the second stanza, and Chris Conner deposited a rebound created during a two-on-one rush 1:37 later. A mere 17 ticks of the clock after the Conner goal, Garrett Wilson scored on a breakaway, pulling the Penguins back to a one-goal deficit, 4-3.

The dust settled for the third period, and Lehigh Valley received an empty net goal off the stick of Phil Varone to make it 5-3. Adam Johnson scored for Wilkes-Barre/Scranton with 11.5 seconds left in regulation, but it proved to be too little too late as Varone’s empty netter from moments before stood as the game-winner.

DeSmith stopped 30 of the 34 shots he faced, while Tokarski made 32 saves at the other end of the ice.