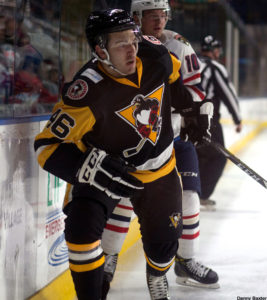 WILKES-BARRE, Pa. – The Wilkes-Barre/Scranton Penguins announced today that they have recalled forwards Cody Wydo and Reid Gardiner from their ECHL affiliate, the Wheeling Nailers.

Wydo, 26, is playing in his third season of professional hockey and currently leads the Nailers in points with 33 (14G-19A). His 14 goals are also tied for second on the team, and his 19 assists rank third. This production comes one year after leading Wheeling in goal scoring at the end of the 2016-17 season (30) and finishing tied for the team’s highest point total (60). Over the course of his 166-game ECHL career, the forward from Allen Park, Michigan has posted 68 goals and 81 assists for 149 total points.

Gardiner got off to a torrid start to the season, recording 10 goals and 7 assists for 17 points in his first 10 games in the ECHL en route to being named ECHL/CCM Rookie of the Month for October. The Humbolt, Saskatchewan native has 27 points through 31 games and is tied with Wydo for the second-most goals on the team (14).