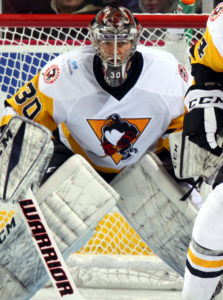 Wednesday, Dec. 27 – PENGUINS 4 vs. Lehigh Valley 5
Every member of the Penguins’ line of Garrett Wilson (1G-1A), Gage Quinney (1G-1A) and Daniel Sprong (0G-2A) turned in two-point nights in a wild and wacky back-and-forth game with the Phantoms. J.S. Dea had an assist for the third-straight game.

Saturday, Dec. 30 – PENGUINS 2 at Hershey 1 (OT)
The I-81 Rivalry delivered another excellent installment with this tightly contested affair ending in Dominik Simon’s overtime game-winner on the same day he was reassigned by Pittsburgh. Wilkes-Barre/Scranton improved to 9-2-1-1 in its last 13 visits to Giant Center with the win.

Wednesday, Jan. 3 – PENGUINS vs. Bridgeport
The Penguins will try and put more distance between them and the team directly behind them in the Atlantic Division standings. This will be Bridgeport’s first trip to Northeast PA this season. The season series is tied at one win apiece.

Friday, Jan. 5 – PENGUINS vs. Springfield
Wilkes-Barre/Scranton rallied for a 6-3 comeback victory in the only meeting of the season between these two clubs. Springfield has dropped three-straight decisions at Mohegan Sun Arena at Casey Plaza.

Saturday, Jan. 6 – PENGUINS vs. Belleville
Saturday marks the first ever match-up between the Penguins and Belleville Senators. Despite being sixth in the North Division, Belleville is 5-2-0-1 against the Atlantic so far.

– Penguins forward Christian Thomas captured the Spengler Cup as a member of Team Canada on Sunday. Canada has now won the tournament three years in a row.

– Kevin Czuczman has an assist on four of the Penguins five overtime game-winning goals this season.

– Since being signed to a second PTO by Wilkes-Barre/Scranton, goalie Anthony Peters has only allowed two goals in 122:43.

– The Penguins have a 7-3 record in games that have gone beyond regulation (overtime or shootout) this season.