WILKES-BARRE, Pa. – The Wilkes-Barre/Scranton Penguins battled back from a two-goal deficit in the third period to defeat the Bridgeport Sound Tigers in overtime, 3-2, on Wednesday night at Mohegan Sun Arena at Casey Plaza.

Wilkes-Barre/Scranton (19-10-2-1) tallied three unanswered goals to post its third win in a row. Teddy Blueger continued his hot streak from December into the New Year by netting the overtime game-winner.

Bridgeport struck first while on the power play just 3:41 into the opening frame. The Sound Tigers set up Travis St. Denis for a one-timer that blasted past Penguins goalie Anthony Peters. The Sound Tigers took a 2-0 lead off of a rebound that bounced right to the stick of Michael Dal Colle, who put it into an open net 3:45 after St. Denis’ opening tally. 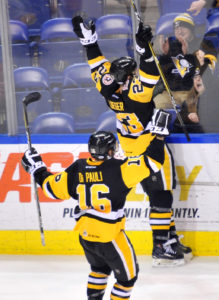 Christopher Gibson through the five-hole with 13:11 left in regulation, but the referee waived it off immediately due to a Penguins player being in the goal crease. However, Wilkes-Barre/Scranton did cash in 1:29 later as Zach Aston-Reese scored off of a face-off win by Jean-Sébastien Dea, pulling the Penguins back within one.

The Penguins pulled Peters for an extra attacker while on late-game power play, giving them a six-on-four advantage with 1:20 left in regulation. A series of passes set up the tying goal from Greg McKegg at 19:36 of the third period. McKegg’s equalizer not only forced overtime, but also ended Bridgeport’s streak of 33 straight penalty kills without surrendering a goal.

Just as overtime got started, Blueger broke in one-on-one against the Sound Tigers’ Josh Ho-Sang, juked to his right and thrust a backhander past Gibson. Blueger’s third overtime game-winner of the season came just 26 seconds into the extra frame.

Peters stopped 28 of the 30 shots Bridgeport threw his way, while Gibson made 22 saves before the decisive overtime winner.