WILKES-BARRE, Pa. – The Wilkes-Barre/Scranton Penguins continued their recent roll by earning their fourth win in a row in a 4-2 defeat of the Springfield Thunderbirds on Friday night at Mohegan Sun Arena at Casey Plaza.

Wilkes-Barre/Scranton (20-10-2-1) used three tallies in the third period to take down Springfield, which had come into Friday’s contest having earned points in five of its last six games.

The Penguins scored the game’s first goal at 3:12 of the second period when Chris Summers’ point shot was redirected by Adam Johnson right to Greg McKegg, who put it into the Thunderbirds’ net.

Both teams were held at bay by excellent goaltending from Wilkes-Barre/Scranton’s Casey DeSmith and Springfield’s Samuel Montembeault until Mark Fayne tied things up, 1-1, 1:03 into the third period.

Christian Thomas picked the top corner over Montembeault’s glove at 4:02 of the final frame of regulation, putting the Penguins back on top, 2-1. 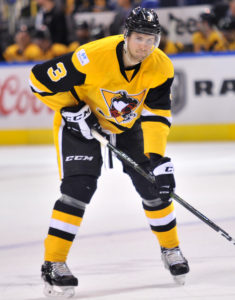 Ryan Haggerty gave Wilkes-Barre/Scranton some breathing room with a goal at 13:09 of the third period, only to see Springfield’s Dryden Hunt strike back 21 seconds later.

With the score sitting at 3-2 in favor of the Penguins, the Thunderbirds pulled their goalie with 1:26 left in regulation. Despite the advantage of an extra attacker, they were never able to truly test DeSmith before the sound of the final buzzer, and Johnson sealed Wilkes-Barre/Scranton’s victory with an empty net tally when only one second was left in the game.

DeSmith finished the game with 20 saves, while Montembeault recorded 19 stops for the Thunderbirds.

The Penguins’ next game is tomorrow, Saturday, Jan. 6, as the Belleville Senators make their first ever visit to Mohegan Sun Arena at Casey Plaza. Puck drop between the Penguins and Senators is scheduled for 7:05 p.m. Individual tickets for all Penguins home games are available at the Mohegan Sun Arena at Casey Plaza box office, online at TicketMaster.com, or by calling 800-745-3000.