WILKES-BARRE, Pa. – The Wilkes-Barre/Scranton Penguins won their fifth game in a row with a commanding 6-0 shutout of the Belleville Senators on Saturday night at Mohegan Sun Arena at Casey Plaza.

Wilkes-Barre/Scranton (21-10-2-1) saw two-goal nights from Christian Thomas and Jean-Sébastien Dea as well as an all-star effort from Atlantic Division All-Star selection Casey DeSmith, who earned his second shutout of the season. 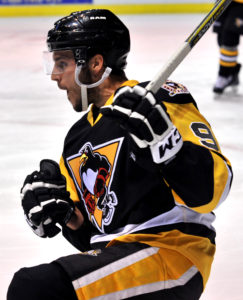 and over Belleville goalie Chris Driedger at 7:47 of the first period. Wilkes-Barre/Scranton scored again less than two minutes later with a bid from Zach Trotman that navigated through a crowd in front of the net to give the Penguins a 2-0 advantage.

The goaltenders took over, trading save after save, until 16:22 of the second period when Thomas set up Dea with a nifty pass, extending the Penguins’ lead to 3-0.

The floodgates opened in the third period, with the Penguins able to double their score in the final frame of regulation. At 6:25 into the third period, Dea notched his second of the night when he banked a shot from behind the goal line off of Driedger’s back and into the net. Ethan Prow got in on the scoring with his first of the year at 13:40.

Wilkes-Barre/Scranton tallied goal number six on the night as Thomas swooped in from the side boards into the slot and beat Driedger blocker-side at 16:53 of the third. This was Thomas’ third goal since returning to the Penguins after capturing the Spengler Cup as a member of Team Canada on Dec. 31.

DeSmith stopped all 24 shots sent his way by the Senators, while Driedger was only able to deny 30 of 36 Penguin chances.

The Penguins’ next game is once again against the Senators, when they travel north of the border to Belleville on Friday, Jan. 12. Wilkes-Barre/Scranton’s next home game is Wednesday, Jan. 17 against the Lehigh Valley Phantoms. Puck drop between the Penguins and Phantoms is scheduled for 7:05 p.m. at Mohegan Sun Arena at Casey Plaza. Individual tickets for all Penguins home games are available at the Mohegan Sun Arena at Casey Plaza box office, online at TicketMaster.com, or by calling 800-745-3000.