BELLEVILLE, Ont. – The Wilkes-Barre/Scranton Penguins achieved their sixth win in a row thanks to a big night from Ryan Haggerty in a 6-2 defeat of the Belleville Senators on Friday night at Yardmen Arena.

Haggerty notched the first hat trick of his professional career as part of a four-point night while Wilkes-Barre/Scranton (22-10-2-1) tied its longest winning streak of the season. 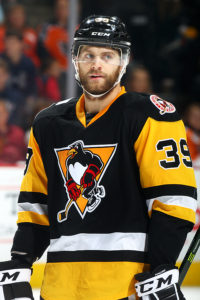 Haggerty got the scoring started for the Penguins just 5:04 into the first period when he rushed into the Senators’ zone and ripped a shot by Marcus Högberg from the top of the right circle.

Belleville’s Colin White scored just before the midpoint of the first period on a wrap-around pass from Max McCormick that set-up White for the slam dunk at the far-side post.

The Penguins regained the lead, 2-1, at 3:38 of the second period as Haggerty grabbed his second goal of the night. One minute and 45 seconds later, newly named Olympian Christian Thomas continued his hot streak against the Senators, finding the back of the net to earn his fourth point (3G-1A) in the two-game series.

Thomas’ goal prompted Senators coach Kurt Kleinendorst to pull Högberg and replace him with back-up goalie Danny Taylor. Taylor’s presence calmed the Senators, as he stopped all eight shots he faced in the second period and watched on as his team capitalized on a power play late in the frame. White’s second goal of the night cut Wilkes-Barre/Scranton’s lead to 3-2 at 16:48 of the second period.

Haggerty completed the hat trick with another wicked shot that he fired from the high slot and beat Taylor for the first time of the night at 5:12 of the third period. Wilkes-Barre/Scranton extended its lead to 5-2 on a power play goal put in at an impossible angle by Garrett Wilson at 14:17 of the final frame of regulation.

Jean-Sébastien Dea sealed the victory with an empty netter with 2:50 remaining in the game, giving the Penguins 12 goals in their two-game season series against the Senators.

Anthony Peters stonewalled the Senators on 19 of the 21 shots faced to win his fourth-straight start. Högberg was dealt the loss, stopping making 10 saves and allowing three goals, while Taylor recorded 16 saves in relief.

The Penguins’ next game is tomorrow, Jan. 13, when they travel to the province of Québec for the first and only time this season to face the Laval Rocket. Wilkes-Barre/Scranton’s next home game is Wednesday, Jan. 17 against the Lehigh Valley Phantoms. Puck drop between the Penguins and Phantoms is scheduled for 7:05 p.m. at Mohegan Sun Arena at Casey Plaza. Individual tickets for all Penguins home games are available at the Mohegan Sun Arena at Casey Plaza box office, online at TicketMaster.com, or by calling 800-745-3000.