WILKES-BARRE, Pa. – The Wilkes-Barre/Scranton Penguins extended their season-best winning streak to eight games by virtue of a 4-1 triumph over the Lehigh Valley Phantoms on Wednesday night at Mohegan Sun Arena at Casey Plaza.

Wilkes-Barre/Scranton (24-10-2-1) forged a new first line of Zach Aston-Reese, Gage Quinney and Ryan Haggerty for the rivalry match-up with Lehigh Valley. The move paid immediate dividends as all three players found the scoresheet, combining for six points, and Haggerty assumed the team lead with 29 points on the season.

Lehigh Valley struck first, using a power play goal from Philippe Myers to take a 1-0 lead at 15:11 of the opening frame. 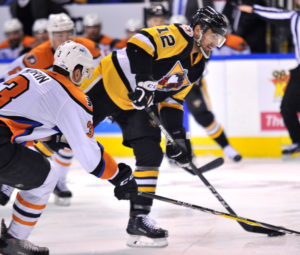 The Phantoms appeared poised to build on their lead with a raucous start to the second period. However, the Penguins survived those tense moments and calmed things down by scoring at 5:32. Quinney was the goal-scorer for the Penguins, after being set-up by his new linemates, Aston-Reese and Haggerty.

Wilkes-Barre/Scranton quickly grabbed a 3-1 lead with tallies from Christian Thomas and Teddy Blueger, separated by 3:25 of game play in the second stanza.

Lehigh Valley pressed hard early in the third period, but Anthony Peters would not yield, denying the Phantoms on 10 shots faced in the final frame of regulation. Desperate to solve Peters and cut into the Penguins’ two-goal lead, Phantoms coach Scott Gordon pulled his goalie for an extra attacker with 5:31 left in the game. The gamble didn’t pay off, as Aston-Reese completed a three-point night with an empty net goal 30 seconds later.

Peters finished the night with 22 saves, winning his sixth-consecutive game in net for the Penguins. Dustin Tokarski was handed the loss, making 24 stops on 27 shots faced.

The Penguins’ next game is Friday, Jan. 19, as they travel to Dunkin’ Donuts Center for the first time this season for a date with the Providence Bruins. Wilkes-Barre/Scranton’s next home game is Saturday, Jan. 27 against the Binghamton Devils. Puck drop between the Penguins and Devils is scheduled for 7:05 p.m. at Mohegan Sun Arena at Casey Plaza. Individual tickets for all Penguins home games are available at the Mohegan Sun Arena at Casey Plaza box office, online at TicketMaster.com, or by calling 800-745-3000.

Season ticket packages for the 19th season of Wilkes-Barre/Scranton Penguins hockey, including  22-game, 12-game and Flexbook plans, are available by contacting the Penguins directly at (570) 208-7367.