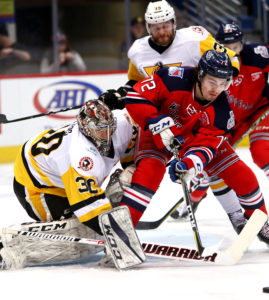 HARTFORD, Conn. – The Wilkes-Barre/Scranton Penguins were handed a 1-0 loss in overtime courtesy of the Hartford Wolf Pack despite throwing 43 shots on goal on Sunday evening at XL Center.

Rookie goaltender Alexandar Georgiev stunned Wilkes-Barre/Scranton (24-11-3-1) by turning aside all 43 shots he faced. At the other side of the ice, Anthony Peters put together another strong effort between the pipes, making 21 saves in regulation to help the Penguins secure a point in the standings.

Wilkes-Barre/Scranton came out quickly and peppered Georgiev with 21 shots in the opening frame, the most the team has generated in one period all season long. Somehow, none of those 21 bids found a hole to get through. Conversely, the Penguins’ defense held the Wolf Pack to only three shots through the first 20 minutes.

One of the Penguins’ finest scoring chances came when Ryan Haggerty came in on a breakaway at 6:27 of the second period, but hit the post. It was one of four times in the course of the game that Wilkes-Barre/Scranton struck iron.

The third period turned into a wide open, back-and-forth affair with Georgiev and Peters trading save after save. Neither side could conjure a game winner in regulation which took the contest to overtime.

Hartford’s Vince Pedrie notched the only goal of the night coming off of a shot that snuck underneath Peters’ pads at 2:25 of the extra frame.

The Penguins’ loss comes two nights after suffering a 1-0 defeat in Providence, marking the first time that Wilkes-Barre/Scranton has suffered shutouts in back-to-back games since Dec. 26 and 27, 2015.