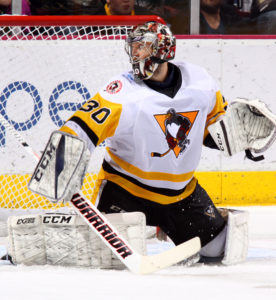 HERSHEY, Pa. – The Wilkes-Barre/Scranton Penguins coasted to a 4-0 win over the Hershey Bears at Giant Center on Wednesday night as Anthony Peters continued his recent run of stellar goaltending.

Peters turned aside all 18 shots he faced to post the first shutout of his AHL career as Wilkes-Barre/Scranton improved to 25-11-3-1 on the season.

Though Wilkes-Barre/Scranton only had four shots on goal in the first period, they capitalized on two of them. Zach Aston-Reese got the scoring started as he took a pass from Greg McKegg and beat Pheonix Copley 3:40 into the first period. The Penguins increased their lead to 2-0 midway through the frame when Jarrett Burton’s backhander from below the goal line deflected off of Copley’s back and into the net.

The second period saw the Bears get three opportunities on the man advantage in addition to several odd-man rushes, but the Penguins managed to limit them to only four shots in the frame.

The Penguins exploded for two more goals in a 1:07 span during the third period starting with a goal from Christian Thomas. Thomas Di Pauli found Thomas wide open between the hashmarks and the Olympian buried it at 10:54 of the third act. A little over one minute later, Wilkes-Barre/Scranton made it 4-0 off the stick of Zach Trotman, who was set up wonderfully by Gage Quinney and Daniel Sprong.

Sprong’s assist on Trotman’s goal gave him his second helper on the night and pulled the rookie into first place on the Penguins in points (30).

Copley stymied 17 of Wilkes-Barre/Scranton’s 21 shots in the loss.

The Penguins’ next game is Friday, Jan. 26, when they take on the Lehigh Valley Phantoms at PPL Center.  Wilkes-Barre/Scranton’s next home game is the following night, Saturday, Jan. 27 against the Binghamton Devils. Puck drop between the Penguins and Devils is scheduled for 7:05 p.m. at Mohegan Sun Arena at Casey Plaza. Individual tickets for all Penguins home games are available at the Mohegan Sun Arena at Casey Plaza box office, online at TicketMaster.com, or by calling 800-745-3000.