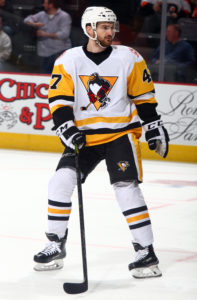 ALLENTOWN, Pa. – The Wilkes-Barre/Scranton Penguins were out-dueled in a clash between the Atlantic Division’s top two teams, as the Lehigh Valley Phantoms skated to a 5-2 victory at PPL Center on Friday night.

Wilkes-Barre/Scranton (25-12-3-1) still hold first place in the Atlantic despite the loss and appeared to be in control of Friday’s contest until an early goaltending change turned the tide.

Daniel Sprong wasted little time to start the scoring, charging forth on a breakaway and rifling a shot through Dustin Tokarski’s five-hole 56 seconds into the game.

Lehigh Valley’s Greg Carey tied the game at 5:06 of the first period, but a redirect by Zach Aston-Reese put the Penguins back in the lead 1:20 later. At this point, Phantoms coach Scott Gordon decided to pull Tokarski and replace him with back-up Alex Lyon.

With time ticking down in the opening frame, Nic Aubé-Kubel got loose for a mini-break and hoisted a backhand shot over the pads of Anthony Peters. Aubé-Kubel’s goal tied the game, 2-2, three minutes before the second intermission.

The Phantoms took their first lead of the game when T.J. Brennan converted on a two-on-none rush at 11:48 of the second period.

Lehigh Valley tacked on two goals in the third period with tallies from Mike Vecchione and Aubé-Kubel separated by 1:21 of game time. Peters finished the game having made 25 saves. Tokarski only stopped two of the four shots he faced, but Lyon denied all 26 shots thrown his way in relief.