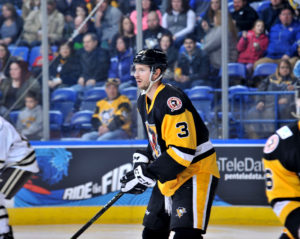 WILKES-BARRE, Pa. – The Wilkes-Barre/Scranton Penguins were buoyed by the play of defenseman Andrey Pedan as they turned away the Hershey Bears with a 4-1 victory at Mohegan Sun Arena at Casey Plaza on Friday night.

Wilkes-Barre/Scranton (27-12-3-1) saw Pedan score twice, including the game-winner, as the team extended its winning streak on home ice to seven games.

Pedan wasted little time firing up the crowd and his teammates, dropping the gloves to fight Hershey’s Zach Sill just five seconds into the game. The early donnybrook didn’t yield immediate results for the Penguins though, as it was the Bears striking first, 6:22 into the first period. A pass by Tyler Graovac intended for Riley Barber was broken up by Penguins forward Gage Quinney, but redirected off of Barber and floated into Wilkes-Barre/Scranton’s net.

Two minutes before the first intermission, the Penguins tied it up while on the power play. A rocket of a shot from Pedan rifled to the top corner and through a screen that Pheonix Copley couldn’t stop.

Both teams registered nine shots on goal during the second period, but both Tristan Jarry and Copley were up to the task, keeping the score even at 1-1.

Wilkes-Barre/Scranton got their first lead of the game 5:34 into the third period when Pedan tallied for the second time on the night off a perfectly timed drop pass from Greg McKegg. Pedan’s fellow defenseman, Kevin Czuczman, added an insurance goal for the Penguins at 11:40 of the third period.

Hershey pulled Copley for an extra attacker and Jarrett Burton took advantage after accepting a pass from Daniel Sprong right in the slot and put the game on ice with 2:16 left in regulation.

Jarry denied 25 Hershey shots, while Copley successfully fended off 22 of the 25 bids that Wilkes-Barre/Scranton threw his way.

The Penguins’ next game is tomorrow, Saturday, Feb. 3 against their other Keystone State rival, the Lehigh Valley Phantoms. Puck drop between the Penguins and Phantoms is scheduled for 7:05 p.m. at Mohegan Sun Arena at Casey Plaza. Saturday’s contest will also be Wilkes-Barre/Scranton’s annual Pink in the Rink night. Individual tickets for all Penguins home games are available at the Mohegan Sun Arena at Casey Plaza box office, online at TicketMaster.com, or by calling 800-745-3000.