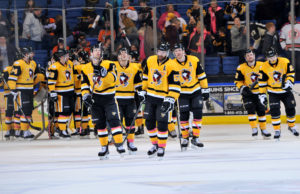 WILKES-BARRE, Pa. – Tristan Jarry stole the show at Mohegan Sun Arena at Casey Plaza on Saturday night, as he and the Wilkes-Barre/Scranton Penguins came away with a 2-1 win against the Lehigh Valley Phantoms.

Wilkes-Barre/Scranton (28-12-3-1) received stellar goaltending all night long as Jarry consistently stymied Lehigh Valley in a shining 34-save performance. The Penguins also used two early tallies to put some distance between them and their in-state rival, and that quick outburst proved to be the difference.

Jean-Sébastien Dea found the back of the net only 26 seconds into the game. Dea came streaking down the right wing wall and perfectly placed his shot over Dustin Tokarski’s shoulder, into the top corner and off the back bar. This marked the third time this season that the Penguins scored on the Phantoms in the first minute of regulation.

Not long after Dea’s opening goal, Jarry began to face an onslaught by the Phantoms. Lehigh Valley racked up 10 shots before the midway mark of the first period, but turned them aside every time. After Jarry came up big on multiple point blank opportunities, Wilkes-Barre/Scranton used a power play goal from Daniel Sprong to jump out to a 2-0 lead at 12:53 of the opening frame. The man advantage marker was the AHL All-Star’s 20th goal on the season.

The second period saw an abundance of power plays, but neither team able to score. Both netminders were sharp, and the score remained 2-0 in favor of the Penguins heading into the second intermission.

Lehigh Valley got another power play in the third period and finally cashed in as Chris Conner snuck the puck through Jarry’s legs from right in front of the net at the nine-minute to pull the Phantoms within one.

Penguins defenseman Chris Summers lent a big hand to his goaltender by making a brilliant defensive play to preserve Wilkes-Barre/Scranton’s lead with just under five minutes to play. While a loose puck lingered dangerously around Jarry’s crease with the goalie unable to locate the puck while contending with an abundance of traffic, Summers stepped into Matt Read and held him at bay for several seconds until a teammate could swoop in and sweep it away from the net-mouth.

Despite the Phantoms pulling Tokarski for an extra attacker with roughly two minutes remaining in regulation, Lehigh Valley couldn’t muster an equalizer on Jarry, who remained dialed in until the sound of the final buzzer.

Tokarski finished the night having made 19 saves on 21 shots faced.

The Penguins’ next game is Wednesday, Feb. 7 when they visit the Springfield Thunderbirds. Wilkes-Barre/Scranton’s next home game is Saturday, Feb. 17, and they’ll take on the Utica Comets for the first time this season. Puck drop between the Penguins and Comets is scheduled for 7:05 p.m. at Mohegan Sun Arena at Casey Plaza. Individual tickets for all Penguins home games are available at the Mohegan Sun Arena at Casey Plaza box office, online at TicketMaster.com, or by calling 800-745-3000.