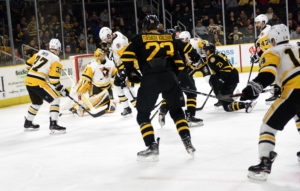 PROVIDENCE, R.I. – For the second time in less than a month’s time, the Wilkes-Barre/Scranton Penguins visited the Dunkin’ Donuts Center on an impressive winning streak and couldn’t push it further as they fell to the Providence Bruins, 4-0, on Friday night.

Wilkes-Barre/Scranton (29-13-3-1) was shut-out by Zane McIntyre for the second trip to Providence in a row, as the Bruins goaltender recorded a 22-save clean sheet to end the Penguins’ four-game win streak.

The Penguins’ netminder, Casey DeSmith, was tested early and often as the Bruins peppered him with 22 shots in the first period, including a blitzkrieg just after the six-minute mark. Both teams battled for position in front of DeSmith, clogging his crease and limiting his vision. Still, DeSmith made a number of tremendous saves before the Penguins cleared the puck and broke the press.

Providence finally solved DeSmith at 8:53 of the first period as Kenny Agostino buried a puck just under the crossbar. A shot from Connor Clifton bounced off the back boards and right onto Agostino’s stick, giving him the opportunity to seize the first lead of the game.

The Bruins extended their lead to 2-0 at 14:39 of the second period while on the power play. A turnover by Andrey Pedan led to Colton Hargrove snapping a wrist shot past DeSmith.

McIntyre continued to hold Wilkes-Barre/Scranton at bay in the third period while Providence tallied twice to make it 4-0. Matt Beleskey thwarted a Penguins clearing attempt and then slid a pass over to Tommy Cross for a one-timer goal 5:58 into the final frame of regulation. Clifton set up another Bruins tally roughly 11 minutes later when he and Colby Cave combined to get Adam Payerl the puck in prime scoring position.

DeSmith stopped 39 of the 43 shots he faced, while McIntyre earned his second shutout in a row against Wilkes-Barre/Scranton.

The Penguins’ next game is Sunday, Feb. 11 when they hope to bounce back in a rematch with the Bruins at Dunkin’ Donuts Center. Wilkes-Barre/Scranton’s next home game is Saturday, Feb. 17, and they’ll take on the Utica Comets for the first time this season. Puck drop between the Penguins and Comets is scheduled for 7:05 p.m. at Mohegan Sun Arena at Casey Plaza. Individual tickets for all Penguins home games are available at the Mohegan Sun Arena at Casey Plaza box office, online at TicketMaster.com, or by calling 800-745-3000.