PENGUINS BOUNCE BACK TO BEAT BRUINS IN SHOOTOUT, 3-2 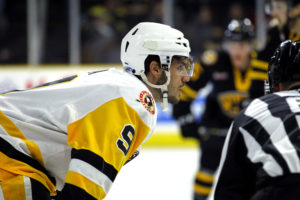 PROVIDENCE, R.I. – The Wilkes-Barre/Scranton Penguins avenged their two shutout losses at Dunkin’ Donuts Center by defeating the Providence Bruins in a shootout, 3-2, on Sunday afternoon in their last visit to Rhode Island this season.

It took 146:31 of game time over the course of three games, but Wilkes-Barre/Scranton (30-13-3-1) finally solved Bruins goalie Zane McIntyre to pull together a two-goal comeback before winning in the best-of-three shootout.

The start of the game was a defensive chess match. Neither team could tally a shot on goal during the first five minutes of the contest thanks to tight-checking defense and shot-blocking prowess on both sides.

The Bruins’ Tommy Cross blasted the first goal of the day past Casey DeSmith during a power play at 13:42. Providence built a 2-0 lead at 17:35 of the first period when Adam Payerl rush towards the net and shoved his own rebound across the goal line.

McIntyre had blanked the Penguins for seven-straight periods at Dunkin’ Donuts Center at this point, but that streak finally came to an end in the middle frame.

Gage Quinney came streaking in on an odd man rush and fired the puck up and over McIntyre’s glove to bring Wilkes-Barre/Scranton within one 6:31 into the second period. The Penguins tied it up on a Jarred Tinordi chip shot over a sprawled-out McIntyre, finished the work done by Reid Gardner who racked up several rebound bids at the side of the net. Tinordi’s tally at 11:06 of the second period was his first goal since Nov. 12.

The third period decided nothing as the score remained 2-2 at the end of 60 minutes, and the shots were dead even at 30-30. No victor emerged after a five-minute overtime session, either.

Jean-Sébastien Dea used crafty puckwork to score in the first round of the shootout and DeSmith was perfect on three Bruins shootout attempts, giving the Penguins their first win at Dunkin’ Donuts Center this season.

DeSmith slammed the door on 32 of 34 shots faced in regulation and overtime, while McIntyre recorded an identical statline at the opposite end of the ice.