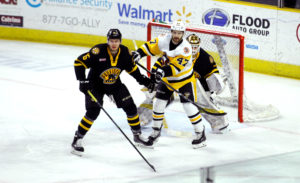 Wednesday, Feb. 7 – PENGUINS 3 at Springfield 1
The Penguins’ special teams came through in a tight battle against Springfield. Gage Quinney opened the scoring, followed by power play goals by Thomas Di Pauli and Garrett Wilson. Goalie Casey DeSmith and the penalty kill prevented Springfield from scoring on all three of their power play chances.

Friday, Feb. 9 – PENGUINS 0 at Providence 4
The Penguins saw their four-game win streak come to an end. Casey DeSmith made an impressive 39 saves while facing a 43 shot attack from Providence.

Sunday, Feb. 11 – PENGUINS 3 at Providence 2 (SO)
The Penguins avenged their previous fall to the Bruins with a brilliant comeback and shootout victory. Trailing 2-0 after one period, the Penguins saw Gage Quinney and Jarred Tinordi feed the comeback, each notching a goal in the second period. Scoreless third and overtime periods led to a shootout, where Jean-Sébastien Dea tallied the only goal.

Friday, Feb. 16 – PENGUINS at Rochester
Wilkes-Barre/Scranton hopes to respond to a 5-2 loss handed to them by Rochester back in December. The Amerks have played 21 overtime games this season, most in the AHL.

Saturday, Feb. 17 – PENGUINS vs. Utica
On Military Appreciation Night Presented by MetLife, the Penguins host the Comets in the clubs’ first meeting this season. Utica is riding a six-game win streak and has skyrocketed to second in the North Division.

– Wilkes-Barre/Scranton became the fourth team to reach 30 wins this season. The Penguins have failed to record 30 wins in only two of their 19 seasons.

– Casey DeSmith has tended goal in all four of the Penguins’ shootouts this season and has made 10 saves on 11 attempts.

– The Penguins are 7-1-1-0 when Gage Quinney scores a goal this season.