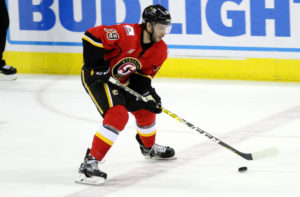 WILKES-BARRE, Pa. – The Wilkes-Barre/Scranton Penguins announced today that they have acquired forward Joseph Cramarossa in a trade with the Stockton Heat in exchange for forward Colin Smith.

Cramarossa is a fifth-year pro that skated in 59 in National Hockey League games last season for the Anaheim Ducks and Vancouver Canucks. During his time in the NHL, Cramarossa racked up four goals and six assists for 10 points. The Toronto, Ontario native was in his first season with Stockton and has accrued 10 points (3G-7A) in 37 games so far in 2017-18.

Cramarossa, 25, has played 201 career games in the American Hockey League. He has 20 goals, 21 assists, 41 points and 241 penalty minutes in that time. Cramarossa was originally drafted by Anaheim in the third round (65th overall) of the 2011 NHL Entry Draft after playing for the Mississauga St. Michael’s Majors in the 2011 Memorial Cup tournament. He wrapped up his junior hockey career with 139 points (51G-87A) in 235 games spent with Mississauga and the Belleville Bulls.

Smith leaves the Penguins having notched five goals and 13 assists for 18 total points over the course of 35 games with Wilkes-Barre/Scranton.