PENGUINS FALL TO COMETS IN OVERTIME, 5-4 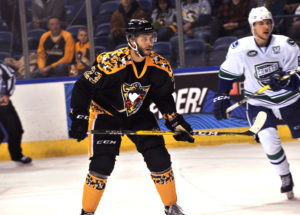 WILKES-BARRE, Pa. – The Wilkes-Barre/Scranton Penguins came up short in an epic back-and-forth battle against the Utica Comets, losing 5-4 in overtime at Mohegan Sun Arena at Casey Plaza on Saturday night.

Wilkes-Barre/Scranton (30-14-4-1) used three tallies in the third period to erase a two-goal deficit and take the lead, but allowed a tying goal late in regulation. Utica’s Patrick Wiercioch ended the game 49 seconds into overtime.

The Penguins found the back of the net first at 9:21 of the opening period. Gage Quinney’s spin around shot redirected between the legs of Thatcher Demko, and Joseph Cramarossa batted the loose change across the goal line for his first goal with Wilkes-Barre/Scranton.

Penguins goaltender Casey DeSmith faced a 20-shot barrage in the second period, holding off the Comets until the final minutes of the frame. The Comets stunned the crowd at Mohegan Sun Arena at Case Plaza as Tony Cameranesi, Michael Chaput and Griffen Molino all scored within 62 seconds, giving Utica a 3-1 lead going into the second intermission.

The Penguins used a power play goal with a two-man advantage to pull within one at 5:51 in the third when Jarrett Burton deflected in a Daniel Sprong one-timer. Ethan Prow tied things up shortly thereafter, launching the puck over Demkos’ glove thanks to a lovely feed from Cramarossa.

Wilson completed a Gordie Howe Hat Trick with a go-ahead goal at 13:36 of the third period. Jarred Tinordi’s blacked shot was gathered by Burton, who threw an elevated puck toward the net and Wilson batted the floating puck into the opposite side corner, granting the Penguins the 4-3 lead.

Despite the quick Penguin goals, Utica kept pushing. Its consistent battling paid off when Cole Cassels snuck the puck across the goal line amidst a net-front crowd with 2:40 left in regulation, tying the game, 4-4.

The game required extra time to determine a winner, but not much, as Wiercioch scored the game-winning goal less than a minute into the overtime period.

DeSmith saved 35 of the 40 shots he faced while Demko stopped 30 of the Penguins’ bids.

The Penguins’ next game is tomorrow, Sunday, Feb. 18, when they take on the Lehigh Valley Phantoms at PPL Center. Wilkes-Barre/Scranton’s next home game is Friday, Feb. 23, and its opponent will be the Rockford IceHogs as the two clubs face-off for the first time franchise history. Rockford’s first ever visit to Mohegan Sun Arena at Casey Plaza is also a WBRE/WYOU Eyewitness News Fan Friday with lower bowl seating available for $14 and select draught beers on sale for $2 from 6:00-7:30 p.m.

THIRD PERIOD PUSH COMES UP SHORT IN LOSS TO HERSHEY