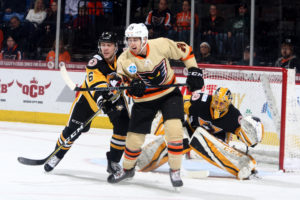 ALLENTOWN, Pa. – The Wilkes-Barre/Scranton Penguins dropped a 4-1 decision to the Lehigh Valley Phantoms at PPL Center on Sunday evening.

Wilkes-Barre/Scranton (30-15-4-1) was stunted by excellent goaltending from Lehigh Valley’s netminder, John Muse, who posted 22 saves throughout the game and held the Penguins at bay on seven power plays.

Lehigh Valley used a favorable bounce during a power play opportunity at 15:21 of the opening period to score the game’s first goal. Oskar Lindblom found the back of the net after a blocked shot bounced right into his wheelhouse, and Penguins goalie Casey DeSmith couldn’t react to the redirection in time.

Phil Varone extended the Phantoms’ lead to 2-0 in the first two minutes of the second stanza, and Mike Vecchione made it 3-0 with another man advantage marker at 11:54 of the middle frame.

Wilkes-Barre/Scranton had several great chances to get back in the game with some power plays late in the second period, but Muse answered the bell. After Daniel Sprong hit the post on a one-timer, Muse scrambled to make a series of saves on Garrett Wilson and Sprong.

The Penguins finally solved Muse and made things interesting at 8:08 of the third period when Jean-Sébastien Dea tipped in a shot from Jarred Tinordi while Wilkes-Barre/Scranton was skating shorthanded.

Wilkes-Barre/Scranton had a couple of more cracks at the man advantage late in the game, but Matt Read iced the victory for Lehigh Valley with a shorthanded empty net goal with 1:54 remaining in regulation.

DeSmith finished the game with 28 saves in what was his third start in three days.

The Penguins’ next game is Friday, Feb. 23, and its opponent will be the Rockford IceHogs as the two clubs face-off for the first time franchise history. Rockford’s first ever visit to Mohegan Sun Arena at Casey Plaza is also a WBRE/WYOU Eyewitness News Fan Friday with lower bowl seating available for $14 and select draught beers on sale for $2 from 6:00-7:30 p.m. Puck drop between the Penguins and IceHogs is scheduled for 7:05 p.m. Individual tickets for all Penguins home games are available at the Mohegan Sun Arena at Casey Plaza box office, online at TicketMaster.com, or by calling 800-745-3000.