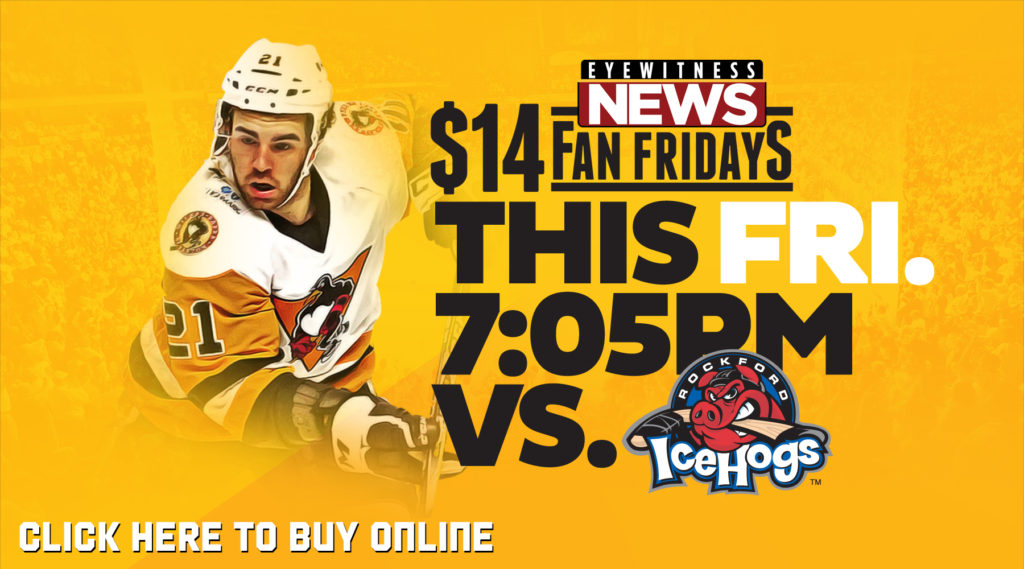 For the first time in franchise history, the Wilkes-Barre/Scranton Penguins will be facing off against the Rockford IceHogs on Friday, February 23rd.  And since this week’s foe is a little unfamiliar, we thought we’d give you a little background on Friday night’s opponent.

While the IceHogs may be new to Penguins fans, they’ve actually been playing hockey since 1999, when they broke in as members of the United Hockey League.  The team’s name was selected by fan voting, beating out monickers ranging from Rhinos to Roughnecks (according to the IceHogs website).

The team competed in the UHL for eight seasons, making five playoff appearances.  Their best season in the league was their final one (2006-07), as they finished third in the 10 team league with a 48-21-7 record, and captured the Colonial Cup Championship in seven games over the Kalamazoo Wings.

The AHL debuted in Rockford in 2007-08 when ownership purchased the dormant Cincinnati Might Ducks franchise and signed an affiliation agreement with the Chicago Blackhawks.

Since joining the AHL, the IceHogs have made five postseason appearances, and have twice advanced to the second round of the Calder Cup playoffs.  Their best season so far has been the 2014-15 campaign, when they finished with a 46-23-5-2 mark, finishing second in the Midwest Division.

This season, the IceHogs have a record of 26-22-3-3, and currently sit in sixth place in the Central Division. Rookie forward Matthew Highmore currently leads the IceHogs in goals (20), points (34), and games played (54), while forward Anthony Louis leads the team in assists with 21.  Jeff Glass leads all Rockford goaltenders in games played (19) and wins (10), with a record of 10-5-1-0.

The IceHogs also have many notable alumni that have gone on to play for the Blackhawks and ultimately win the Stanley Cup.  Bryan Bickell, Corey Crawford, Scott Darling, Niklas Hjalmarsson, Nick Leddy, Troy Brouwer, Andrew Shaw, Kris Versteeg, and Antti Raanta have all spent time in Rockford and gone on to win the Stanley Cup with the NHL club.

Current Wilkes-Barre/Scranton Penguins Ryan Haggerty (2015-16) and Michael Leighton (2014-16) have spent time with the IceHogs, while some recognizable faces from the Pens’ past (Jeff Taffe, Rob Scuderi, David Koci, Tim Brent) have also suited up for the team.

You can also request more info on FAN FRIDAY by filling in the info below: