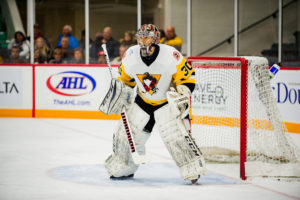 WILKES-BARRE, Pa. – The Wilkes-Barre/Scranton Penguins announced today that they have signed goaltender Anthony Peters to an American Hockey League contract for the remainder of the 2017-18 season through the 2018-2019 campaign.

Peters, 26, has recorded a 7-4-2 record this season with Wilkes-Barre/Scranton and a 2.83 goals against average and .900 save percentage over the course of two separate professional tryout agreements with the Penguins. Peters began his second PTO with a six-game winning streak that spanned Dec. 29, 2017 – Jan. 17, 2018. The Blyth, Ontario native registered the first shutout of his AHL career on Jan. 24 against the Hershey Bears.

Peters has played 16 games this year with the Cincinnati Cyclones, posting a 10-4-1 record. He owns a .925 save percentage and a 2.34 goals against average in the ECHL this season.

The Penguins’ next game is Friday, Feb. 23, and its opponent will be the Rockford IceHogs as the two clubs face-off for the first time franchise history. Rockford’s first ever visit to Mohegan Sun Arena at Casey Plaza is also an Eyewitness News Fan Friday with lower bowl seating available for $14 and select draught beers on sale for $2 from 6:00-7:30 p.m.