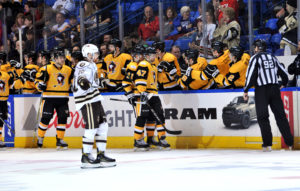 WILKES-BARRE, Pa. – Adam Johnson delivered one of the finest performances of his rookie season to propel the Wilkes-Barre/Scranton Penguins to a 3-2 victory in a tight, back-and-forth match-up with the Hershey Bears on Sunday afternoon at Mohegan Sun Arena at Casey Plaza.

Johnson found the back of the net twice as Wilkes-Barre/Scranton (32-16-4-1) received one goal in each period.

Hershey struck first just 2:06 into the contest when Travis Boyd whipped a behind-the-back, backhand pass from below the goal line to Riley Barber who fired a one-time shot past Casey DeSmith. Wilkes-Barre/Scranton wasted little time to respond, as team captain Tom Kostopoulos blasted in a feed from Gage Quinney.

The Penguins eventually grabbed their first lead of the afternoon with a power play goal at 15:56 of the middle frame. Ethan Prow fired a shot from the point which Johnson tipped past goaltender Pheonix Copley. Once again, there was a swift answer to a go-ahead goal, this time with Hershey’s Tyler Graovac completing a tic-tac-toe passing sequence 1:12 after Johnson’s man advantage marker.

Teddy Blueger got loose for a breakaway midway through the third period thanks to a sliding effort from Daniel Sprong, and Johnson gathered the rebound, allowing the Penguins to regain the lead.

Hershey pulled Copley for an extra attacker with 1:50 left in regulation, but couldn’t manage to get another puck past DeSmith.

The Penguins special teams shined bright on the afternoon, going a perfect three-for-three on the penalty kill and capitalizing on one of their two man advantage opportunities.

DeSmith made 23 saves, while Copley stopped 22 shots thrown his way.

Puck drop between the Penguins and Griffins is scheduled for 3:05 p.m. Individual tickets for all Penguins home games are available at the Mohegan Sun Arena at Casey Plaza box office, online at TicketMaster.com, or by calling 800-745-3000.