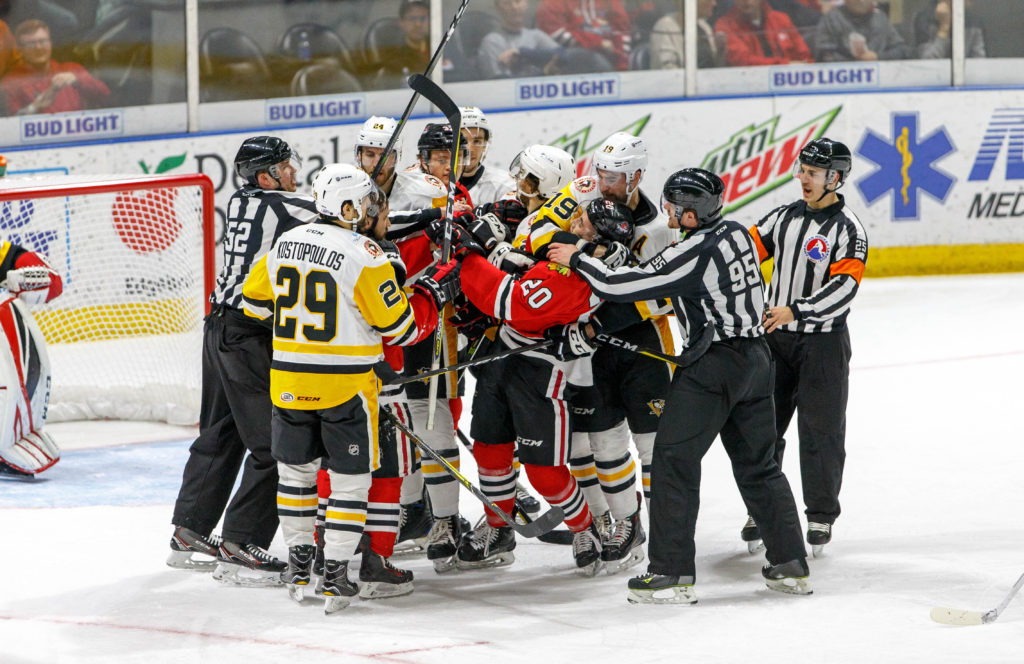 ROCKFORD, Ill. – The Wilkes-Barre/Scranton Penguins fell to the Rockford IceHogs, 3-0, on Saturday in a hard-hitting, penalty-filled contest at BMO Harris Bank Center.

Both teams had six power plays and combined for 66 penalty minutes throughout the course of the game but Wilkes-Barre/Scranton (33-17-4-1) did not take advantage of all the special teams action in the second contest of its Midwest swing.

Anthony Louis put the IceHogs on the board first, redirecting in a pass from the boards while standing between the hashmarks at 8:47 of the opening frame.

Rockford nearly made it 2-0 when Luke Johnson stepped up to a loose puck in the slot during an IceHogs’ power play, but rang it off the post behind Étienne Marcoux with eight minutes left in the second period. Shortly thereafter, the Penguins nearly pulled even on a man advantage of their own when Adam Johnson tipped a shot over the glove of Collin Delia, but its trajectory carried it narrowly wide of the post. After those close calls, the second period ultimately came and went without any scoring for either side.

Even though the middle frame didn’t yield any scoring, it only took 10 seconds into the third period for Andreas Martinsen to put the IceHogs ahead, 2-0.

The four-on-three power play was the Penguins’ sixth man advantage opportunity of the game, and despite some solid scoring chances, Delia stood tall.

Martinsen sealed the win for Rockford with an empty net goal when only 61 seconds remained in regulation.

Marcoux recorded 19 saves on 21 shots faced in his AHL debut, while Delia stopped 34 shots to post the first shutout of his pro career.

The Penguins’ next game is tomorrow, Sunday, Mar. 4, when they continue their three-in-three set through the Midwest and face the Milwaukee Admirals. Wilkes-Barre/Scranton’s next home game is against the Grand Rapids Griffins on Saturday, Mar. 10. The Griffins’ first trip to Mohegan Sun Arena at Casey Plaza since 2009 also serves as the Penguins’ Star Wars Night.

Puck drop between the Penguins and Griffins on Star Wars Night is scheduled for 7:05 p.m. Individual tickets for all Penguins home games are available at the Mohegan Sun Arena at Casey Plaza box office, online at TicketMaster.com, or by calling 800-745-3000.

PENGUINS DOWN DEVILS IN SHOOTOUT, 5-4