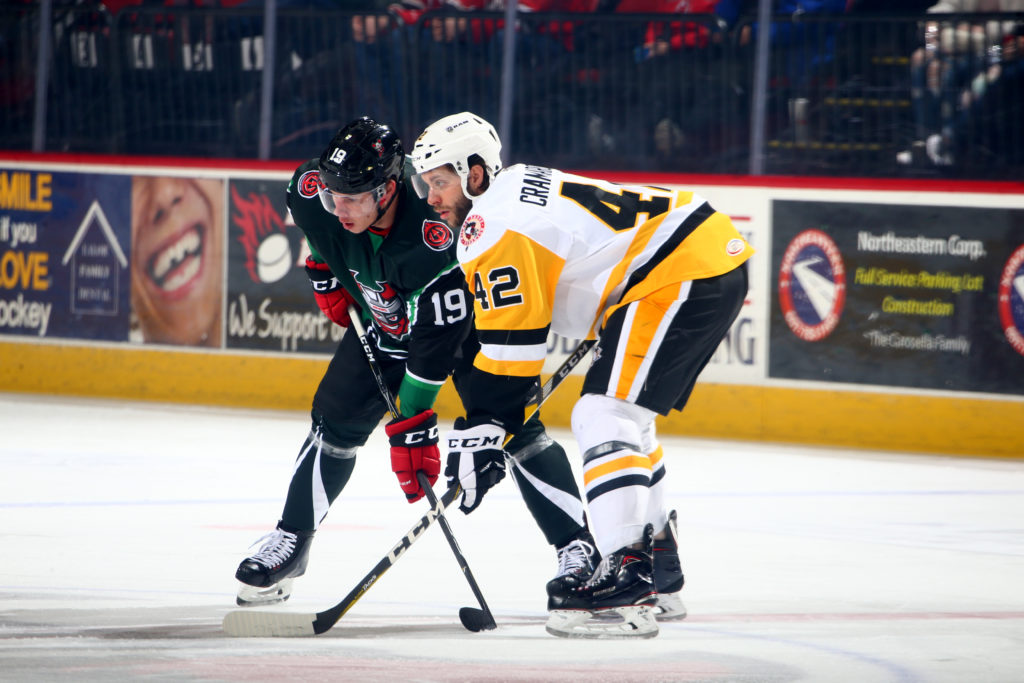 Blueger notched his league-leading fourth overtime-deciding tally of the season for Wilkes-Barre/Scranton (34-17-4-2) to beat Binghamton for the fourth time in four meetings this season.

The Penguins got off to a hot start when Jean-Sébastien Dea used a shorthanded goal to give the team the first lead of the game at 4:41 of the opening frame. Gage Quinney tacked on another goal five and a half minutes later, shooting from an angle along the goal line and somehow snuck behind Eddie Läck.

Wilkes-Barre/Scranton almost escaped the first period unscathed until Jacob MacDonald scores with 1.2 seconds left before the intermission. Binghamton lined up for an offensive zone face-off with 2.2 ticks remaining in the period when Michael Latta won the draw cleanly to MacDonald, who blasted a slap shot from the point into the Penguins’ net.

As power play opportunities began to mount for the Devils in the second period, the Penguins’ penalty kill held the home team’s man advantage unit at bay. By the end of the contest, Wilkes-Barre/Scranton successfully killed off all five of its opponents power plays throughout the game.

Despite the penalty killing prowess of the Penguins, the Devils found another late period goal to pull even, 2-2. Latta found a puck that skittered into the slot, spun a backhand shot towards the cage and tied the game with 1:41 left in the middle frame.

Both clubs’ goaltenders shined in the third, with Michael Leighton and Läck both making 14 saves on 14 shots faced in the final frame of regulation. Leighton, who was making his first start since Dec. 22, 2017, showed no signs of rust while facing the pressure-packed situation of a tie game in the third period.

The strong performance of Leighton and Läck sent the game to overtime, where Blueger worked his magic once again. Dea danced around a defending player in the corner of the Devils zone and powered his way to the front of the net. He had the puck poked off his stick, but the loose biscuit went right to Blueger who buried it to give the Penguins the win four minutes into the extra frame.

Leighton made 27 saves total in his return to the lineup, while Läck turned aside 29 of the shots he faced.

The Penguins’ next game is tomorrow, Saturday, Mar. 10, against the Grand Rapids Griffins. The Griffins’ first trip to Mohegan Sun Arena at Casey Plaza since 2009 also serves as the Penguins’ Star Wars Night. Puck drop between the Penguins and Griffins on Star Wars Night is scheduled for 7:05 p.m. Individual tickets for all Penguins home games are available at the Mohegan Sun Arena at Casey Plaza box office, online at TicketMaster.com, or by calling 800-745-3000.