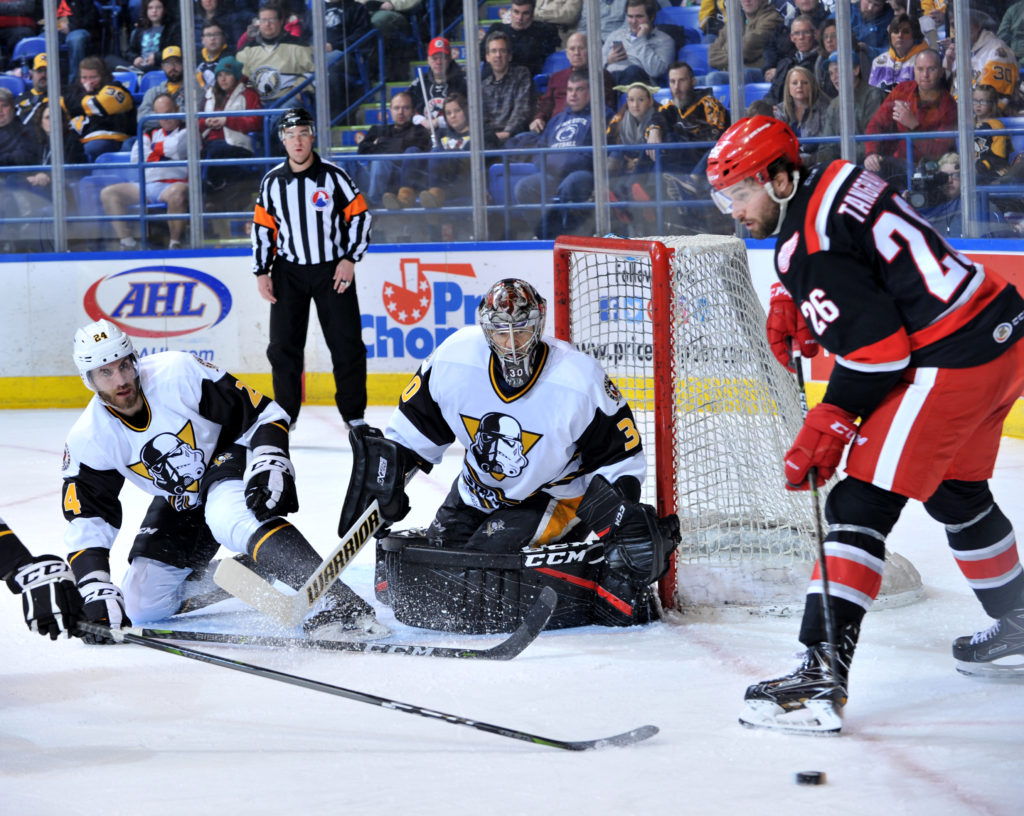 WILKES-BARRE, Pa. – Goaltender Anthony Peters had a stellar night between the pipes for the Wilkes-Barre/Scranton Penguins, leading them to a 2-1 victory over the Grand Rapids Griffins on Saturday night at Mohegan Sun Arena at Casey Plaza.

Peters recorded 32 saves in the victory and played a big role in Wilkes-Barre/Scranton (34-17-4-2) going a perfect five-for-five on the penalty kill against one of the league’s top power plays.

On the Penguins’ second penalty kill of the night, Joseph Cramarossa fed Adam Johnson for a breakaway chance. Johnson deked goaltender Tom McCollum, sliding the puck across the goal line for a shorthanded goal that opened the scoring at 12:45 of the first period.

The Griffins proceeded to out-shoot the Penguins, 11-5, in the first period and kept the barrage of shots coming through the second stanza, firing 13 shots in the middle frame. Peters was up to the challenge, turning away every puck he faced.

Late in the second period, the Penguins were assessed a bench penalty for too many men on the ice. Then they immediately saw Thomas Di Pauli called for a delay of game face-off infraction, giving the Griffins a full two-minute five-on-three man advantage. The Penguins’ penalty kill was brilliant once again, and Peters made two jaw-dropping stops on cross-crease one-timers orchestrated by Grand Rapids.

Eventually, the Griffins solved Peters and tied the game when Ben Street knocked in a rebound from a blocked shot at 7:58 in the third period.

The Penguins came right back and responded three and half minutes later, as Kevin Czuczman fired the puck through a mass of humanity and past a screened McCollum.

Grand Rapids never truly tested Peters with the goalie pulled for an extra attacker, and so Wilkes-Barre/Scranton held on for the 2-1 win.

McCollum stopped 22 of the 24 shots he faced in a losing effort.

The Penguins’ next game is Tuesday, Mar. 13, when they travel to North Carolina to take on the Charlotte Checkers. Wilkes-Barre/Scranton’s next home game is the team’s annual St. Patrick’s Day celebration as they face-off against the Hartford Wolf Pack on Saturday, Mar. 17.