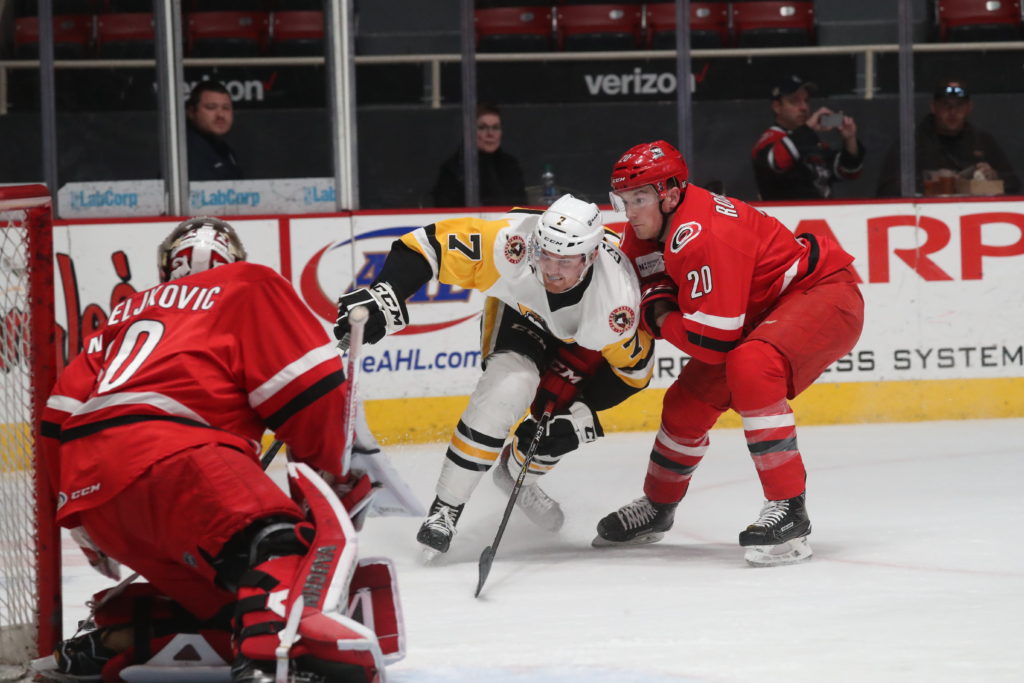 CHARLOTTE, N.C. – The Wilkes-Barre/Scranton Penguins and Charlotte Checkers faced one another for the second night in a row at Bojangles’ Coliseum, but this time, the Penguins were on the losing end of a 3-1 final on Wednesday.

Wilkes-Barre/Scranton (36-18-4-2) pressed hard in the third period, but couldn’t muster the comeback to suffer its first loss in Charlotte in franchise history (5-1-0-0).

The two clubs played to a scoreless tie in the first 20 minutes of play, despite the Penguins forcing plenty of turnovers and generating several odd-man rushes.

Charlotte finally found the game’s first goal at 7:30 of the middle frame when Julien Gauthier muscled his way from the corner to the hashmarks and overpowered Anthony Peters with a heavy snap shot. The Checkers expanded their lead to 2-0 six minutes later on a power play goal generated on a tic-tac-toe setup finished by Greg McKegg.

As the Penguins entered the third period, they wasted no time peppering Alex Nedeljkovic with shots. The Checkers’ goalie continually stifled their efforts until Tom Sestito pitchforked a rebound through Nedeljkovic’s five-hole at 8:11 of the final frame. Daniel Sprong raced past Charlotte’s defense for a breakaway, was stopped by Nedeljkovic, but kept his feet moving to gather the loose puck and put it back on goal, creating the rebound opportunity for Sestito.

With the comeback in sights, McKegg dashed his former team’s hopes by notching an insurance marker for Charlotte with 5:23 left in regulation.

The Penguins’ next game is at home on Saturday, Mar. 17 against the Hartford Wolf Pack and serves as the team’s annual St. Patrick’s Day celebration. Puck drop between the Penguins and Wolf Pack is scheduled for 7:05 p.m. Individual tickets for all Penguins home games are available at the Mohegan Sun Arena at Casey Plaza box office, online at TicketMaster.com, or by calling 800-745-3000.