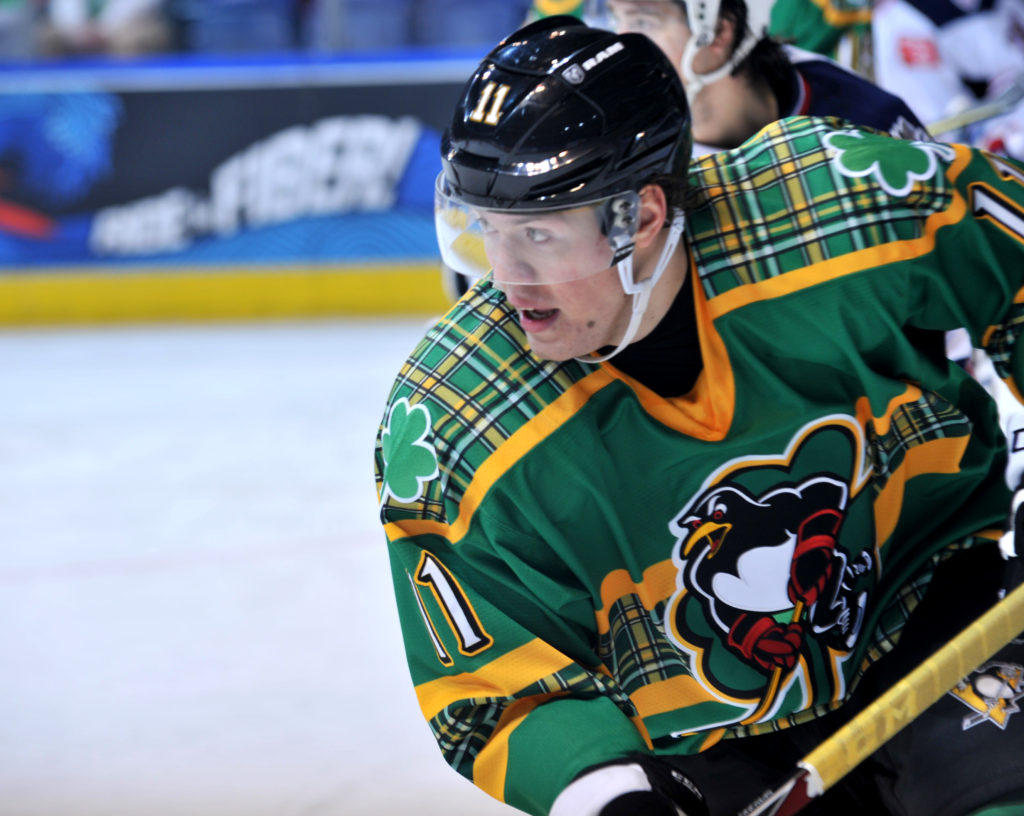 WILKES-BARRE. Pa. – The Wilkes-Barre/Scranton Penguins struggled to solve rookie goaltender Chris Nell in a 4-1 loss to the Hartford Wolf Pack on Saturday night at Mohegan Sun Arena at Casey Plaza.

After a lackluster start, Wilkes-Barre/Scranton (36-19-4-2) came back with an 18-shot performance in the second period, and eventually got on the board in the third. However, quick-strike offense from the Wolf Pack put them in a position to ride the strong play of Nell to a victory.

The visiting Wolf Pack more than doubled the Penguins’ shot total in the first period, firing 16 pucks on net. Anthony Peters stood tall, turning the first 11 shots aside until Cole Schneider tipped a bid from the point through Peters’ equipment at 16:14 of the opening frame. The Wolf Pack struck again 34 seconds later when Dan DeSalvo jammed in a rebound.

Wilkes-Barre/Scranton took control of the pace of play in the second period and used four power play opportunities to out-shoot Hartford, 18-3. Time and time again, Nell stifled the Penguins’ scoring attempts, whether they were on the man advantage or skating at even strength.

Still trailing by two after the second intermission, Wilkes-Barre/Scranton came out determined in the final frame of regulation. Just under five minutes into the third period, Daniel Sprong finally beat Nell and put the Penguins on the board with his first even strength goal since Jan. 26.

The Penguins continued the press, and Kevin Czuczman hit the post on a shot through traffic that appeared destined to be the tying goal. However, Hartford stormed down the ice moments after Czuczman’s post shot and took advantage of a turnover in Wilkes-Barre/Scranton’s zone to pull back ahead by two. Less than a minute after Steven Fogarty made it 3-1, Vinni Lettieri added another goal with 4:17 left in regulation to put enough distance between the Wolf Pack and Penguins and secure the victory.

Peters made 26 saves on the night, while Nell stopped 30 shots.

The Penguins’ next game is tomorrow, Sunday, Mar. 18, against the Hershey Bears. Puck drop between the Penguins and Bears is scheduled for 3:05 p.m. at Mohegan Sun Arena at Casey Plaza. Individual tickets for all Penguins home games are available at the Mohegan Sun Arena at Casey Plaza box office, online at TicketMaster.com, or by calling 800-745-3000.