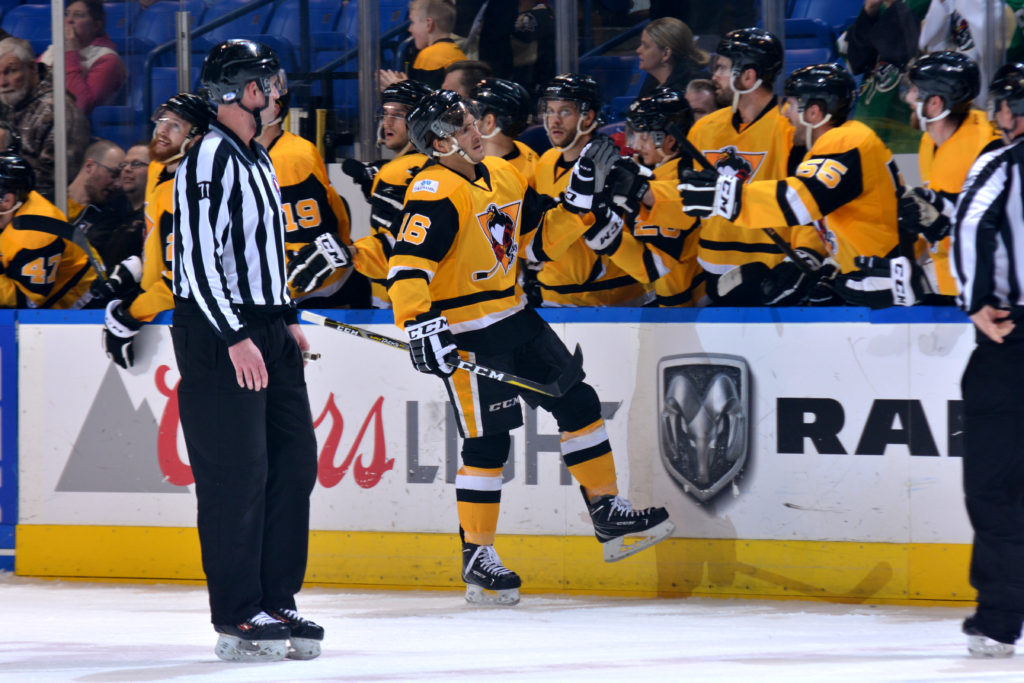 WILKES-BARRE. Pa. – Even though they found themselves down early, the Wilkes-Barre/Scranton Penguins erupted with offense in the second half of the game to beat the Hershey Bears, 6-4, on Sunday afternoon at Mohegan Sun Arena at Casey Plaza.

Wilkes-Barre/Scranton (37-19-4-2) notched five goals in the final two periods of play, including two from Thomas Di Pauli, to emerge victorious and remain unbeaten in regulation against its bitter rival this season (8-0-1-1).

Hershey wasted little time scoring when Liam O’Brien jammed a puck past Anthony 62 seconds into the contest. Shortly thereafter, the Bears struck again as a centering pass took a favorable bounce right to a wide-open Joe Whitney to extend the lead to 2-0.

Étienne Marcoux then came in to relieve Peters, giving the home team a well-needed energy boost. Joseph Cramarossa put the Penguins on the board at 11:49. Jarrett Burton sped down the right side of the ice and fired the biscuit at Hershey’s net. Cramarossa was right there to knock in the rebound and pull his squad within one.

However, Hershey re-established its two-goal advantage when Jonas Siegenthaler stepped up from the point, shot the puck through a crowd and rifled it over Marcoux’s glove with 4:07 left in the opening frame.

The game turned on its head midway through the second period when Bears defenseman Madison Bowey handed Penguins forward Gage Quinney the puck at the Hershey blue line, springing Quinney loose on a breakaway. Quinney hit the post, but regained the puck and on the same offensive zone possession, fed Tom Sestito atop the crease for a goal that made it 3-2 at 11:58 of the second stanza.

Wilkes-Barre/Scranton proceeded to out-possess Hershey throughout the second period, peppering Pheonix Copley with grade-A scoring chances. The team’s hard work culminated in Di Pauli burying a buzzer-beater goal at the end of the second period. After being reviewed by the officials, it was determined that the puck crossed the goal line with one second before the second intermission.

The Penguins took a 4-3 lead 2:38 into the third period thanks to Christian Thomas collecting his own rebound and shoving the puck underneath Copley’s equipment. Five minutes later, Di Pauli added another goal, shooting a one-timer on the rush set up by Tom Kostopoulos. The tally that made it 5-3, Penguins, marked Kostopoulos’ third assist of the game.

Siegenthaler notched his second goal of the night while the two teams were skating at four-on-four to make things interesting, but Cramarossa and Teddy Blueger combined on a two-on-one race up ice to put the Penguins back in a 6-4 lead with 4:41 left in regulation.

Marcoux denied 17 of 19 shots he faced to earn his first win in the AHL. Peters left the game having made one save on three shots against. Copley made 26 saves in the loss for Hershey.

The Penguins’ next game is on Tuesday, Mar. 20 when they visit the Toronto Marlies. Wilkes-Barre/Scranton’s next home game is against the Bridgeport Sound Tigers on Sunday, Mar. 25. Puck drop between the Penguins and Sound Tigers is scheduled for 3:05 p.m. at Mohegan Sun Arena at Casey Plaza. Individual tickets for all Penguins home games are available at the Mohegan Sun Arena at Casey Plaza box office, online at TicketMaster.com, or by calling 800-745-3000.