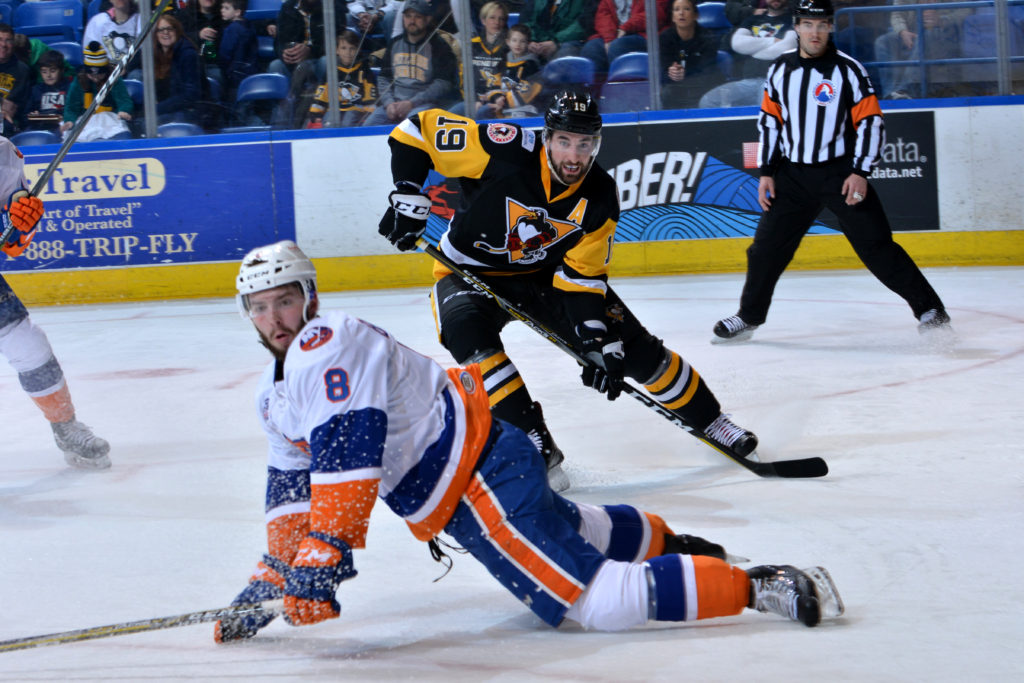 WILKES-BARRE, Pa. – The Wilkes-Barre/Scranton Penguins couldn’t muster the same comeback magic they showed earlier in the week as they closed out their three-in-three weekend set with a 6-3 loss to the Bridgeport Sound Tigers at Mohegan Sun Arena at Casey Plaza on Sunday afternoon.

Wilkes-Barre/Scranton’s (38-20-6-2) excellent power play effort early in the final period was not enough to draw even with the well-rested Sound Tigers, who were idle the night earlier after the Penguins were coming off of three-straight overtime contests.

Though the Penguins opened the game with a 4-0 shot advantage through the first six minutes, the Sound Tigers eventually struck first. Rookie Ryan Hitchcock collected his own rebound on a blocked shot, and his second attempt bounced off of a Wilkes-Barre/Scranton defenseman past Tristan Jarry midway through the opening period.

Hitchcock caused problems for the Penguins again by factoring in on the Sound Tigers’ second goal of the game. During a power play in the final minutes of the opening frame, Hitchcock nailed the crossbar and the rebound rolled right to a wide open Travis St. Denis who buried it into the Penguins’ net.

Chris Summers put the home team on the board with under five minutes left in the middle frame, marking his first goal in a Wilkes-Barre/Scranton uniform. The celebration for Summers’ first goal in over a year was short-lived, as Steve Bernier reestablished the Sound Tigers’ four-goal lead less than two minutes later.

The Penguins came out with a purpose in the third period, and took advantage of some early power plays dealt their way. First, Jean-Sébastien Dea buried during a two-man advantage, swiftly followed by a strike by Andrey Pedan. Suddenly, Wilkes-Barre/Scranton had slashed its deficit in half with 16:15 still left to play.

However, the rest of the final frame of regulation was marred by penalties assessed to both sides, and St. Denis eventually added a power play, empty net goal in the game’s dying seconds to close out the scoring, 6-3.

The Penguins finished the game two-for-six on the power play, while their penalty kill unit was put to work 11 times on the afternoon.

Jarry stopped 25 shots for his first regulation loss in the AHL since Oct. 14, 2017, while the opposing Eamon McAdam made 24 saves on the afternoon.