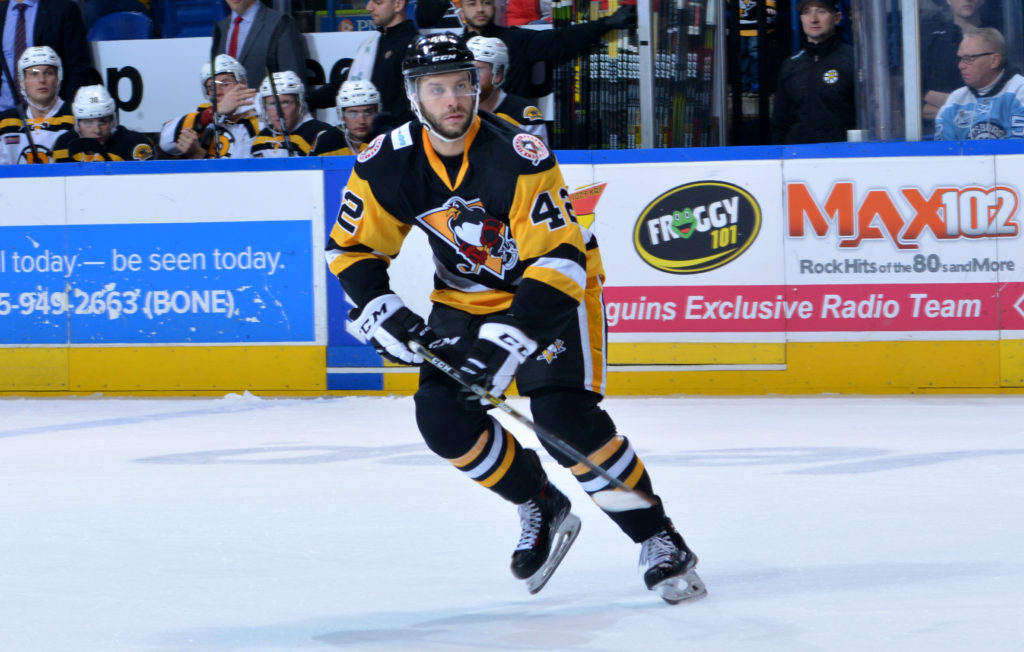 Daniel Sprong scored his team-leading 25th and 26th goals of the season within the opening minutes of the middle frame to spur Wilkes-Barre/Scranton (39-20-6-2) on to beat their rival and reclaim second place in the Atlantic Division.

The Penguins came out with a strong offensive effort in the first period, throwing 14 pucks at the net, but were unable to solve goaltender Zane McIntyre. Wilkes-Barre/Scranton got its greatest scoring chance of the opening frame when Jean-Sébastien Dea was sprung on a shorthanded breakaway, only to be denied by McIntyre.

Shortly after McIntyre stoned Dea on the shorthanded opportunity, the P-Bruins eventually converted on that man advantage with 41.5 seconds left in the first period. Jakub Zbořil released a rocket slap shot that found its way through traffic and into the Penguins’ net to put the visitors on the board first.

The Penguins came roaring back to start the middle frame, using three goals within the first 6:05 of the period to gain a two-goal lead. First, Sprong fooled McIntyre with a spin-o-rama backhander from the left wall as the puck somehow leaked past the Providence goalie’s pad and inside the near post. Less than three minutes later, Garrett Wilson fed Sprong for an opportunity that he ripped through McIntyre’s five-hole.

Sprong’s second goal on the night pulled him into a tie with Charlotte’s Warren Foegele for the league lead in rookie goal scoring (26).

On his first shift back after retreating to the locker room for an injury evaluation, Joseph Cramarossa sniped the glove side of McIntyre and extended the Penguins’ lead to 3-1.

Anton Blidh halted the spread of Wilkes-Barre/Scranton’s wildfire when he beat Tristan Jarry clean over the glove on the rush, pulling the P-Bruins back within one at 8:54 of the second stanza.

Both teams’ offenses were held in check until midway through the final period. Teddy Blueger pulled off a sensational deke in tight quarters and roofed a shot right under the crossbar for a Penguins insurance maker, putting them up, 4-2.

Jarred Tinordi flipped the puck into the empty net in the game’s closing seconds to round out the scoring at 5-2.

Both Jarry and McIntyre ended up with 27 saves on the night.

The Penguins’ next game is Friday, Mar. 30 when they travel to Connecticut to take on the Hartford Wolf Pack for the final time this season. Wilkes-Barre/Scranton’s next home game is Saturday, Mar. 31, and they’ll host the Providence Bruins once again. Saturday’s puck drop between the Penguins and P-Bruins is scheduled for 7:05 p.m. at Mohegan Sun Arena at Casey Plaza.