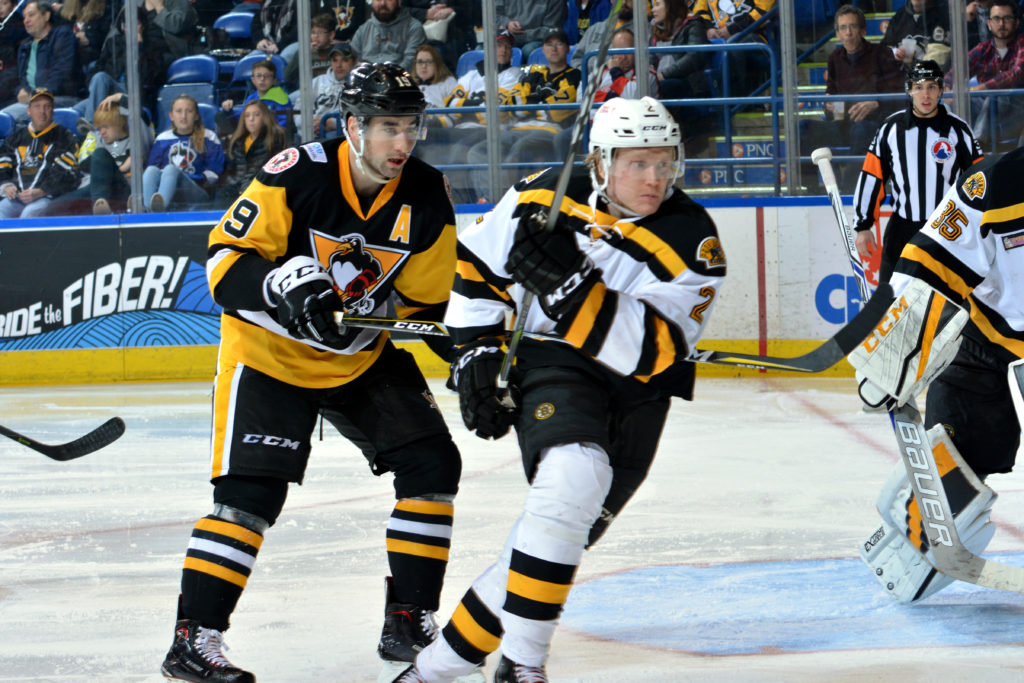 WILKES-BARRE, Pa. – The Wilkes-Barre/Scranton Penguins dropped a tenacious battle to the Providence Bruins, 3-1, at Mohegan Sun Arena at Casey Plaza on Saturday night.

Wilkes-Barre/Scranton (40-21-6-2) outshot the visitors 35-27, but Jordan Binnington turned in a great performance in net that stymied the Penguins time and time again.

The Bruins got on the board first when Adam Payerl capitalized on the power play at 14:06 in the opening period. Payerl was able to slap a rebound behind Tristan Jarry to put the visitors up, 1-0.

With 3:12 left in the first period, Trent Frederic collected the puck on a failed clear attempt by the Penguins forwards and fired a shot past Jarry for his second pro goal. However, Wilkes-Barre/Scranton stormed down the ice on the next shift and reduced the deficit back down to one. Jean-Sébastien Dea gathered a centering pass from Daniel Sprong and picked the corner over Binnington’s glove before the first intermission.

The Penguins and Bruins kept the chances coming in the middle frame, firing 11 and 13 shots respectively, as both goaltenders stayed strong in their crease.

Penguins came close to tying the game midway through the final period when Sprong rushed down the ice and whipped a shot at the opposing net. Garrett Wilson was there to collect the rebound only to be denied by Binnington.

The Bruins cashed in on the power play once again when Jordan Szwarz lifted the puck past Jarry into the left corner of the goal, extending his team’s lead to 3-1 at 8:32 in the third.

Binnington’s brilliance continued as he stood tall to fend off a Sam Lafferty scoring chance moments later. Lafferty collected a big rebound and threw it towards a wide open goal, but the goaltender reached behind his back, smacking the puck away in acrobatic fashion and robbing Lafferty of his first pro goal.

Binnington ended up with 34 saves, while Jarry posted 24 stops in the loss.

The Penguins’ next game is Tuesday, Apr. 3 against the Hershey Bears. Puck drop between the Penguins and Bears is scheduled for 7:05 p.m. at Mohegan Sun Arena at Casey Plaza. Individual tickets for the final three home games of Wilkes-Barre/Scranton’s 19th season of hockey are available at the Mohegan Sun Arena at Casey Plaza box office, online at TicketMaster.com, or by contacting the Penguins directly at (570) 208-7367.